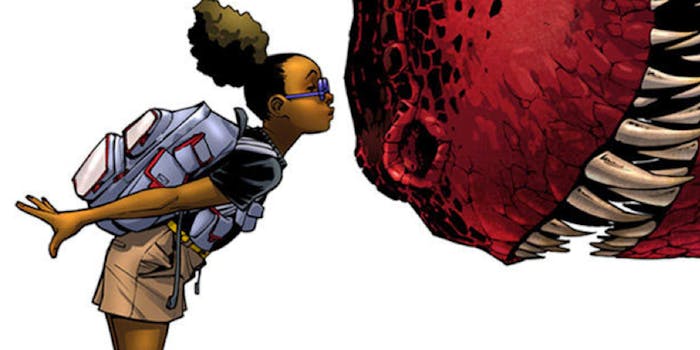 If there were a Venn Diagram of things geeks like, it would probably have spaces for stuff like “comics,” “awesome girls,” “nerdy space things,” “cool representation,” and, obviously, “dinosaurs.”

In other words, it would basically be Marvel‘s new comic, Moon Girl and Devil Dinosaur.

The new series is a reboot of a short-lived creation from the ’70s by legendary comics artist Jack Kirby. Kirby’s Devil Dino and his companion Moon Boy first appeared in 1978’s Devil Dinosaur: 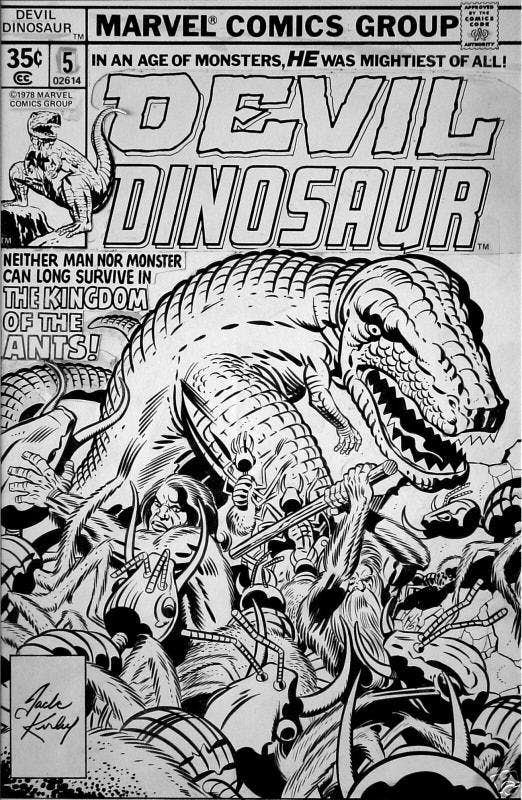 Kirby’s dinosaur has stayed popular over the years, most recently appearing in Planet Hulk: Though he looks like a big, ferocious red tyrannosaur, as you can see, he’s really just a big kitten.

The series creative team includes writers Amy Reeder (Batwoman) and Brandon Montclare (Rocket Girl), and artist Natacha Bustos. Montclare told Entertainment Weekly in the preview that the juxtaposition of a precocious young girl with an ancient terrifying dino will make for interesting storylines:

“What’s really cool is to be able to put a Tyrannosaurus Rex in modern day New York City and also juxtapose with a little girl,” Montclare said. “You’re going to have a 30-foot dinosaur interacting with a three-and-a-half tall girl…I can’t think of any other book that’s kind of like that, where you have these kind of crazy things that are going to be very different to work on. But if everyone can pull it off, it’s going to be a unique type of storytelling.”

Marvel fans immediately went crazy for the concept. “Who told Marvel to do a comic series about middle school me??” wrote Tumblr user nostalgiacloud. “This is fantastic.”

The new series will premiere this fall.