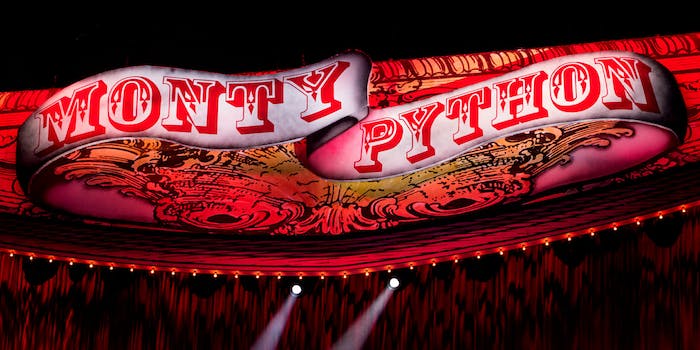 Fans can soon view some of the archives themselves.

Dozens of unused sketches and never-before-seen scripts from Monty Python have been discovered in the archives of member Michael Palin, who donated them to the British Library.

According to the Times of London, Palin donated the material back in June. The archives had notebooks full of Monty Python drafts that were never filmed; some were cut for budgetary reasons while Monty Python felt that others weren’t necessary. Among those unused scripts are two sketches cut from Monty Python and the Holy Grail—including an alternate ending. There’s enough material, with at least one largely written by Monty Python’s Terry Jones, that Palin doesn’t remember all of it.

The first scene (which you can read at the Times) was between King Arthur and the Pink Knight, who wouldn’t let Arthur make his way across a bridge unless he received a kiss from Arthur. The sketch has not aged well, and Palin noted that the sketch was indicative of the time it was written.

“When we were writing Python in 1973, there was much more homophobia—or rather not homophobia exactly, but awkwardness of dealing with the whole subject of homosexuality,” Palin told the Times.

The unused ending, which featured a battle between Arthur and his knights, the French, and a killer rabbit, was abandoned because it was too expensive; Monty Python also believed the actual ending worked better.

A number of Monty Python scripts will be featured at the British Library for visitors to examine on Aug. 7.