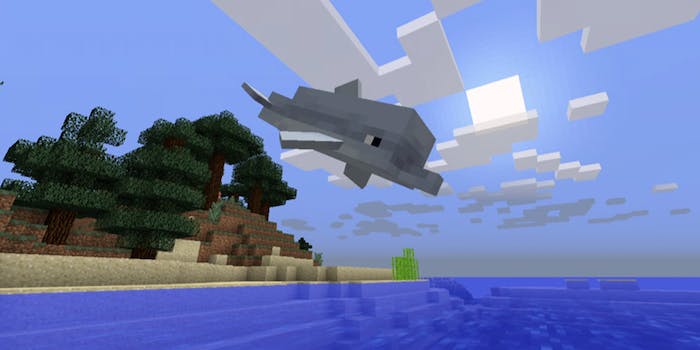 Minecraft to release new underwater features in ‘The Update Aquatic’

Fans of the massively creative sandbox game Minecraft will have something to celebrate early next year.

During the MineCon Earth 2017 livestream on Saturday, the game’s development team revealed a new slew of features coming to the iconic game, including massively expanded oceans complete with dolphins. The update is called, appropriately enough, “The Update Aquatic,” and it’s one of a few changes to the game teased by video game developer Mojang on Saturday.

In a sit-down interview with actor Will Arnett—done in the style of a late-night talk show, complete with a desk carried out onto the set—Minecraft lead creative designer Jens Bergensten dished some details on updates scheduled to arrive in the weeks and months to come.

While the new underwater update is no doubt cause for celebration for Minecraft fans, there was one slightly disappointing omission from the announcement, as a delay was announced for the hotly anticipated Super Duper Graphics Pack. According to a statement posted to the official Minecraft website, the new graphics won’t be released until 2018, the same year that the game will be ported over to the Nintendo Switch.

Here's everything we announced at MINECON Earth! Thanks to all our players for helping us put on a show for everyone. We couldn't do it without you. Enjoy the Aquatic Update!https://t.co/DnpkxxPXsX pic.twitter.com/63KG4guIUY

“While originally set for release this year, there’s a lot of work to be done still and we’re not going to be ready to launch it in 2017. We’ll be releasing Super Duper next year,” the statement reads.

Originally released in 2011, Minecraft has become one of the most popular video games of all time, lauded for its creative applications for children and adults alike. Millions of copies of the game have sold in the past six years, and in 2015 Microsoft purchased both Mojang and the rights to Minecraft for a staggering $2.5 billion.