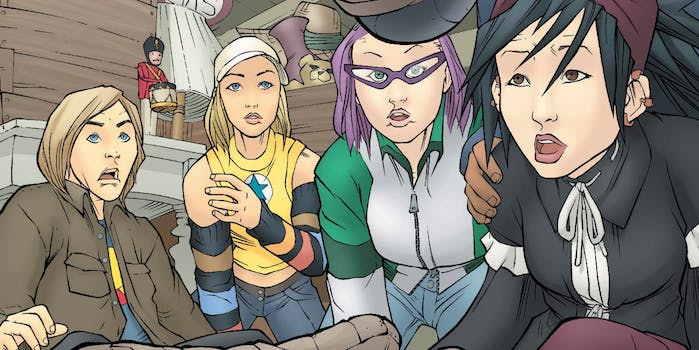 The premise is only the beginning.

Marvel’s teens are on the loose—and it could be one of the most intuitive projects the comics giant has done in years.

Announced in August, Runaways, the fan-favorite Marvel comic from Brian K. Vaughan and Adrian Alphona, is finally getting an adaptation on Hulu. While Marvel TV shows have thrived on ABC and Netflix, this is the first Marvel property for Hulu, which is on a mission to add more original programming. Marvel originally planned to adapt the comic into a movie, but the project was shelved years ago.

Runaways is still in the pilot stage, and while it doesn’t have the name recognition of Captain America, Spider-Man, or Batman, the comics are beloved by fans. The cult following and its trade collection sales were high enough that Marvel brought it back after its original 18-issue run.

Even The Avengers director Joss Whedon, who Vaughan hand-picked to write an arc of the series, is a massive fan. His fervor in a letter he wrote to Marvel during the original 18-issue run has a tone familiar to some fans of Whedon’s creative endeavors. 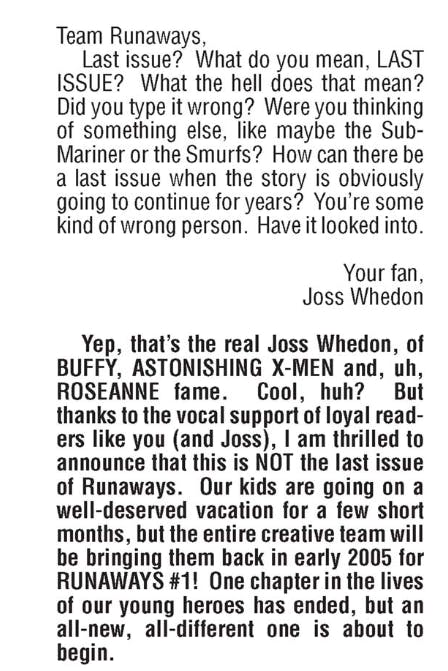 So what is it about the series that’s drawn so many people to it? Let’s review.

The synopsis of Runaways is a very simple one, and even though we’re dealing with witches, aliens, mutants, and a kid who holds a telepathic link with a genetically engineered dinosaur, the story is rooted in the real world. Here is the synopsis for Runaways, courtesy of Marvel’s press release on the Hulu order:

Every teenager thinks their parents are evil. What if you found out they actually were? “Marvel’s Runaways” is the story of six diverse teenagers who can barely stand each other but who must unite against a common foe–their parents.

The group of kids barely know one another and can’t stand each other, but they’re forced to hang out once a year while their parents conduct a charity event. Or so they think, until they discover their parents are members of a supervillain group called “the Pride” and witness the death of a young woman in a ritualistic ceremony. After trying to go to the police doesn’t work—the cops are controlled by the Pride—they run away (hence the series’s title) and unite to take their parents down.

While many of Marvel’s running comics titles star teens—Spider-Man’s Miles Morales and Ms. Marvel’s Kamala Khan for instance—who have to juggle school, friends, and their home life on top of being superheroes, the Marvel Cinematic Universe‘s screen adaptations are mostly populated by adults. There are exceptions to this in Marvel films, such as Negasonic Teenage Warhead in Deadpool and many of the mutants seen in 20th Century Fox’s X-Men movies. But the new Peter Parker (Tom Holland), who appeared for the first time this year in Captain America: Civil War, is the only major teen character in Marvel Studio’s onscreen lineup. 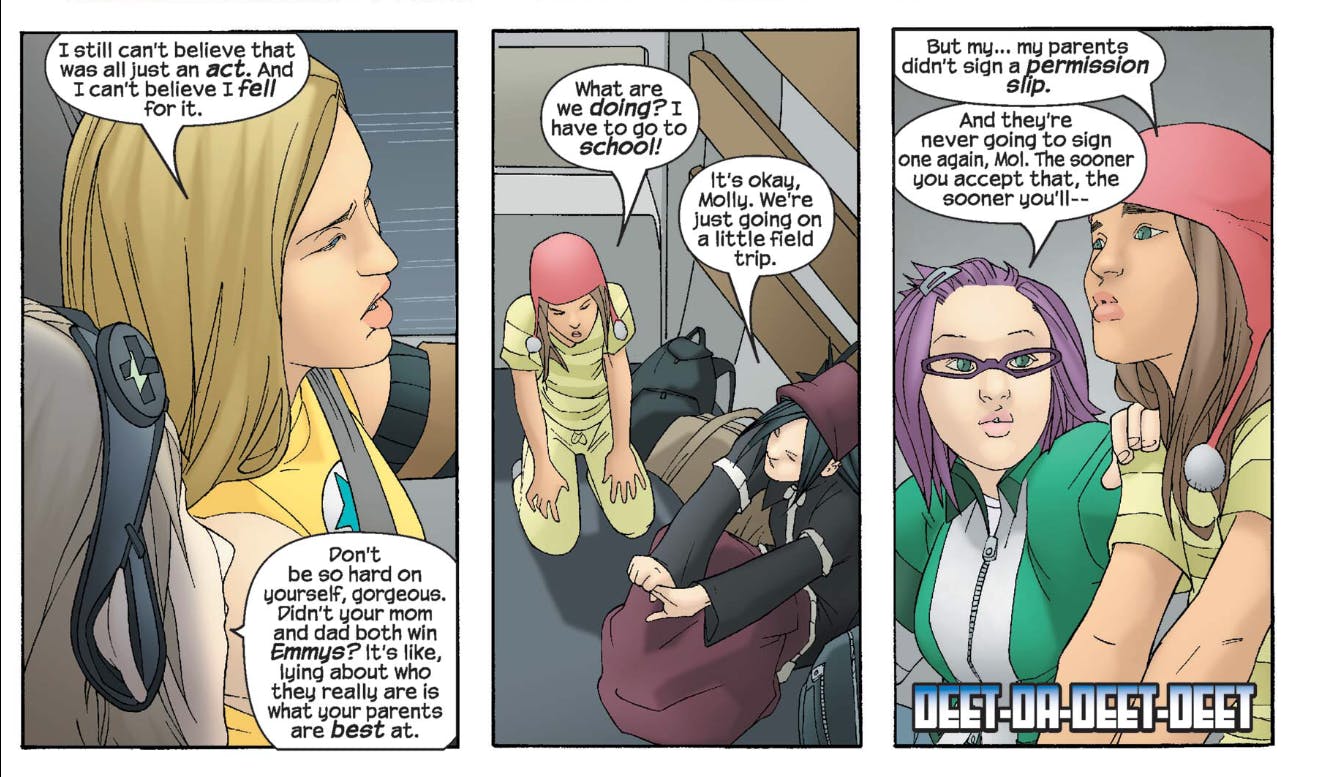 Runaways almost solely focuses on young characters, and even amid threats of the world’s destruction, they’re still normal kids. They bicker and get swept up in the kind of drama that tends to occur when teenagers are put into extreme situations together—the kind of thing Runaways showrunner Josh Schwartz’s excelled at while working on The O.C. and Gossip Girl. And because of their youth, they’re sorely underestimated—even by their own parents.

In a sea of procedural dramas and overblown superhero battles, it’s pretty refreshing.

The cast of characters is more inclusive than most

The Marvel Cinematic Universe has fielded its fair share of criticism for not being diverse enough (and even a couple of whitewashing accusations), so adapting Runaways—while not an instant solution by any means—is a start. Runaways has complex set of characters who aren’t defined by their gender, race, or sexuality; in later versions, Runaways explores gender fluidity.

Victor Mancha, a cyborg who created Ultron in the comics, a shape-shifting Skrull named Xavin, and Klara Prast, who’s from a different time and can control plant growth, show up later in the series, but we’re going to focus on the six characters from the original 18-issue series. 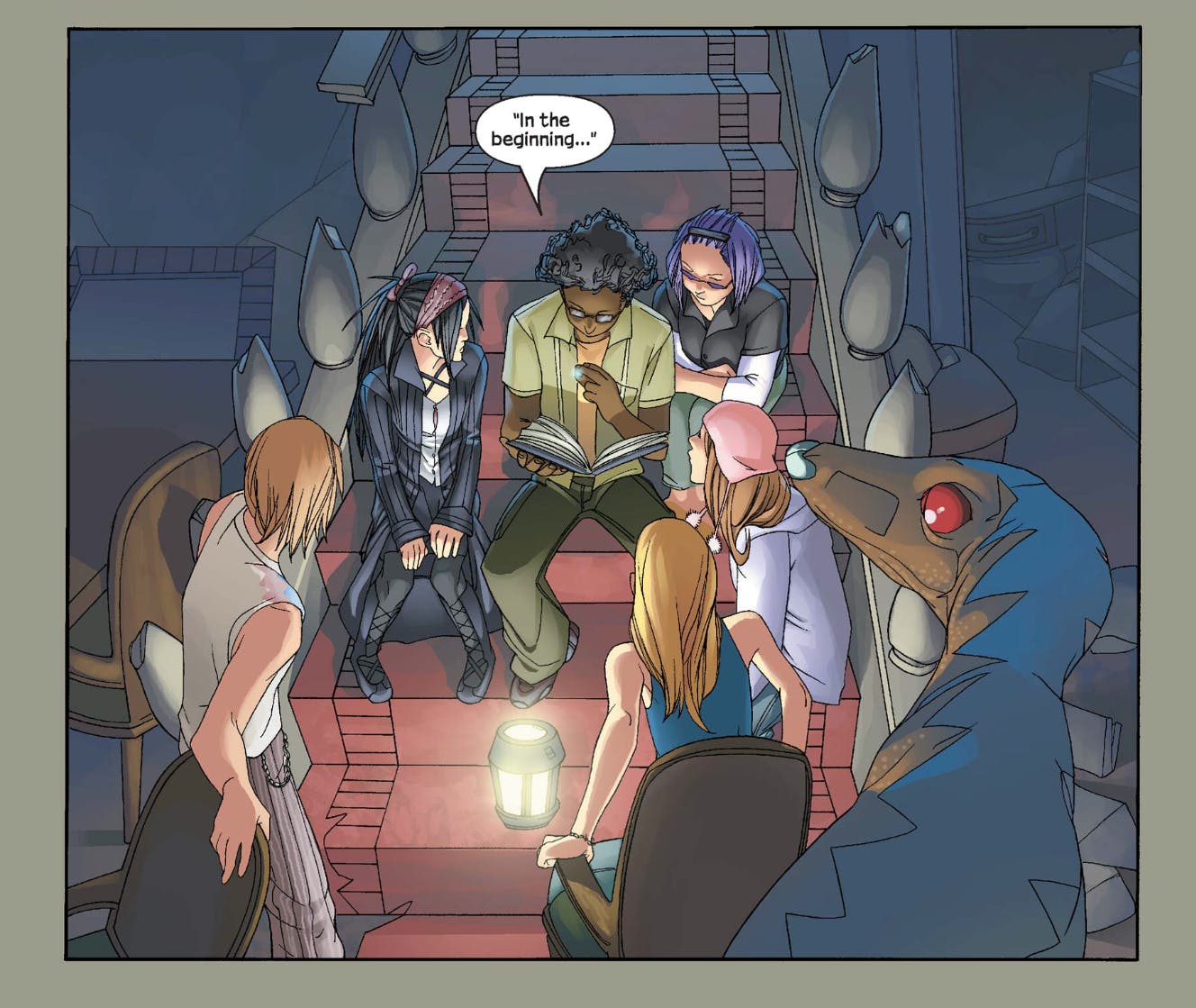 Alex Wilder is the brains of the operations, able to solve problems quickly and translate the ancient text detailing the Pride’s complex history. His parents control the police like a mob boss, and it’s Alex who discovered the secret tunnel that led the other Runaways to discovering their parents’ true colors.

Chase Stein is initially introduced as the jock type, but he quickly becomes a key asset to the team. He provides their secret hideaway when they’re forced to go underground, steals his parents’ tech (which can easily rival Tony Stark’s arsenal), and becomes adept at using a pair of “Fistigons,” or flame-generating gauntlets.

Gertrude Yorkes is sarcastic and cynical, dons purple hair, and she has telepathic control over a genetically engineered dinosaur named Old Lace that her time-traveling parents gifted her.

Nico Minoru is the daughter of dark wizards who has the ability to cast magic with a staff that comes out of her chest when she bleeds. She eventually becomes the team’s leader.

Karolina Dean is a vegan and the child of Hollywood actors, but she soon discovers that she and her parents are aliens—hidden by a medical bracelet she’s told to never take off. Her true form and powers are a sight to behold.

Molly Hayes is the youngest of the team at 11, so everyone else tries to shelter her from the brutal nature of their parents’ villainy at first. Her parents are telepathic mutants, and Molly is capable of super strength. While Marvel Studios can’t legally call her a “mutant” since Fox has exclusive rights to the term via its X-Men license, Marvel could make Hayes an Inhuman, which have already been established in the Marvel Cinematic Universe. 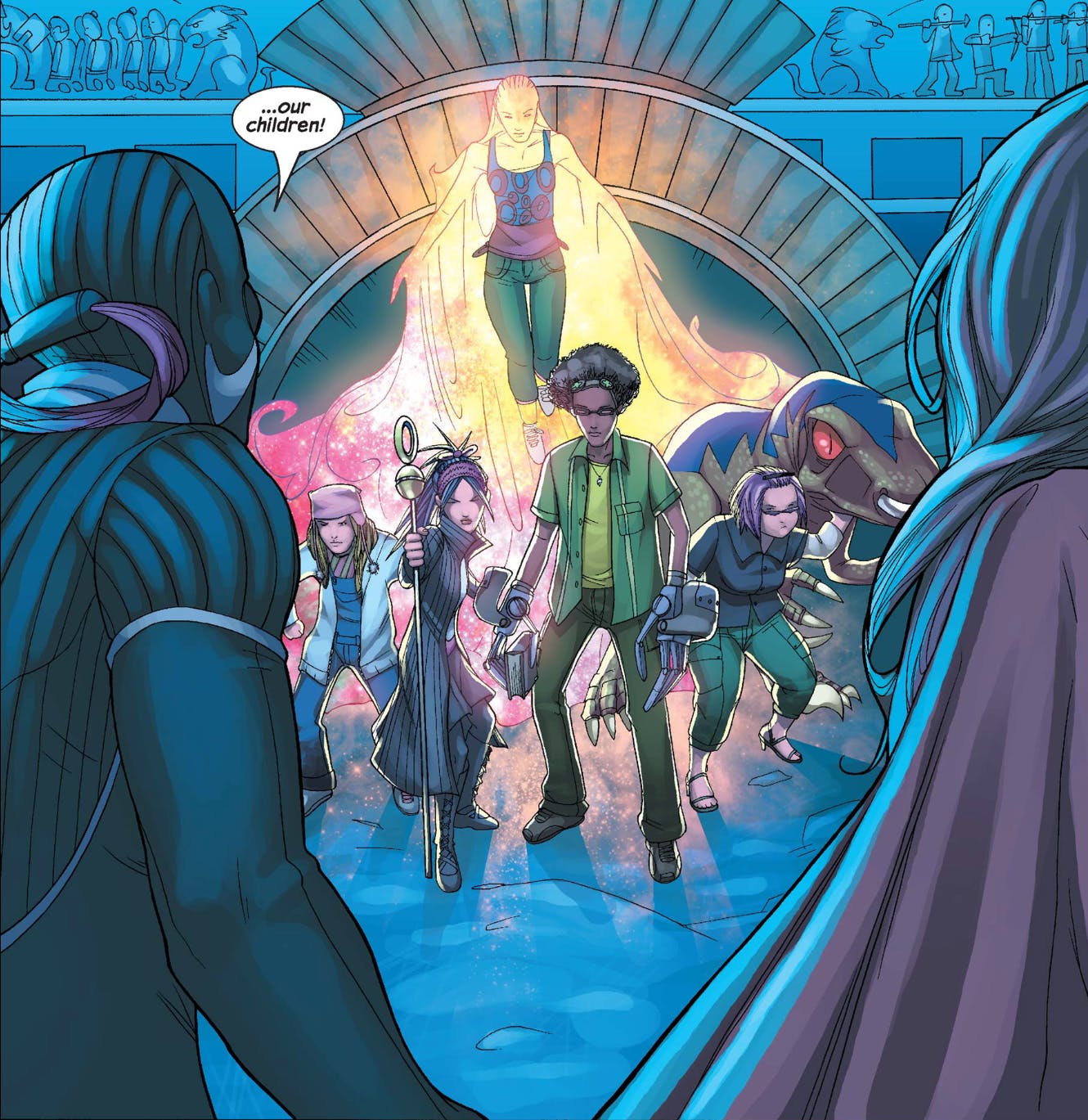 The themes are just as relevant today

When Alex, Nico, Karolina, Chase, and Gert first learn their parents are actually evil (they attempt to hide it from Molly initially), they try to do the sensible thing and call the police. They’re not superheroes, and they aren’t burdened with the idea that they’re the only ones who can deal with their parents. But that whole idea goes out the window when the cops don’t believe them and alert their parents. Their parents set the cops on them and frame their own children for murder. 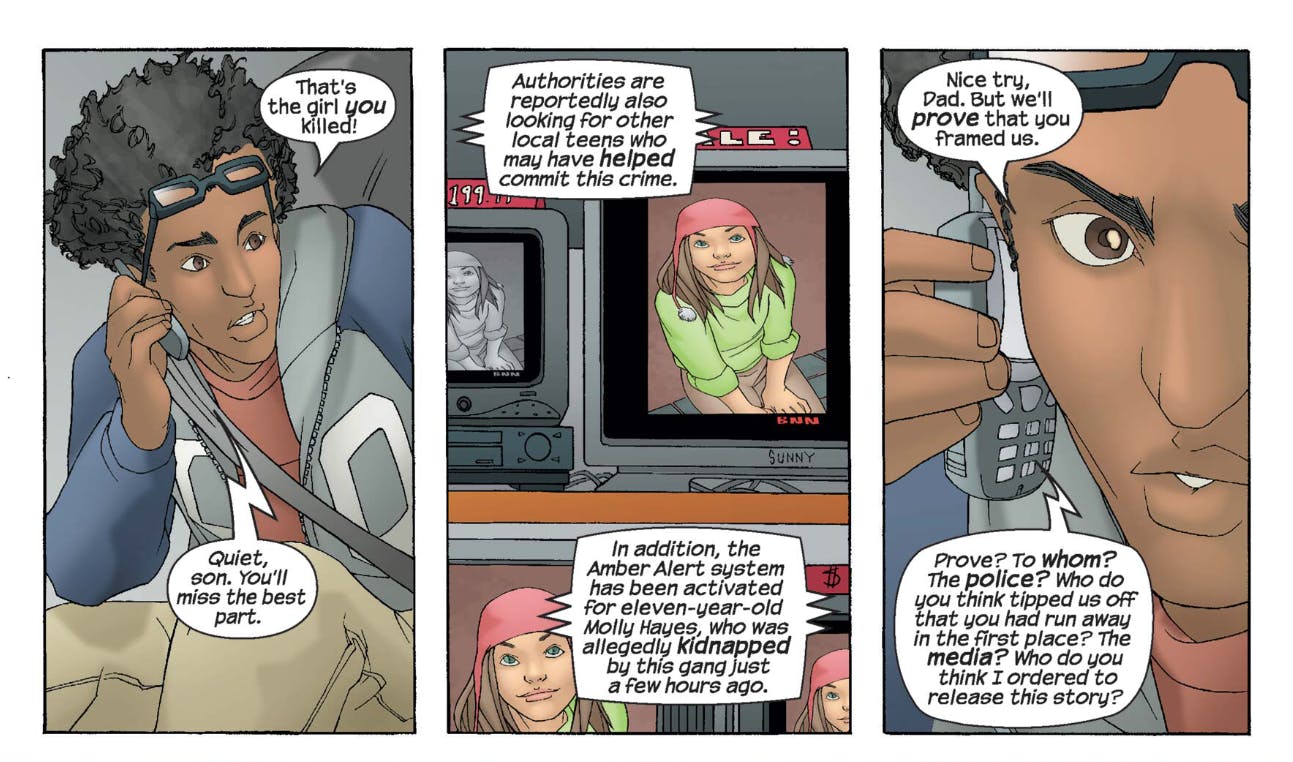 Technology has come along way since 2003, so if Runaways gets a modern-day makeover, it’ll make things both more interesting and more terrifying. (And no, we’re not talking about the possible Snapchats.)

For one, if all of the kids have cellphones, any of them could start recording or streaming the Pride’s meet up, perhaps capturing the death on film. If the Pride, having learned the video got out, used their influence to have it removed from the show’s equivalent of YouTube or Facebook, conspiracies might spark within the show. And once the police get involved, cellphones could be used to track down the kids or spy on their every move. Burner phones or Tor to communicate might better options.

The Pride’s driving goal in the comics is to build a world for their children to inherit after the Gibborim—a race of ancient giants—destroy the human race. It’s unclear what direction the TV show might go.

We also don’t know if Runaways will receive a series order, but it brings a hell a lot of potential to Hulu’s table.

Runaways is available on Marvel Unlimited and Comixology.