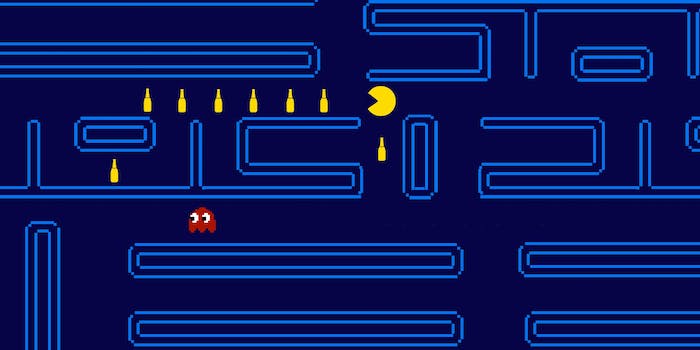 How big would your quarter have to be to play a life-size version of the classic Pac-Man arcade game?

For its 2015 Super Bowl ad for Bud Light, Anheuser-Busch built a life-sized maze modeled after the iconic first level of Pac-Man. Sam Kennedy, a vice president in the digital and social marketing department of the PR firm Edelman, tweeted a picture of the massive set, built in the Los Angeles Fashion District.

This Pac-Man maze was built for a commercial titled “Coin,” according to the Chicago Tribune. It’s part of an ad campaign meant to make Bud Light cool to drink in the eyes of millennials. The Tribune also reports that in the commercial, we will get an answer to the “How large would the giant quarter be?” question.

Check out the manhole-cover size dots in the nighttime pictures. You can also see people positioning the huge ghosts (a.k.a. Blinky, Pinky, Inky, and Clyde).

If you want an idea as to what the final result might look like, here’s the first level of Pac-Man being played by a master. Feel free to then totally judge Anheuser-Busch on whether they run Pac-Man in the correct pattern, or not.