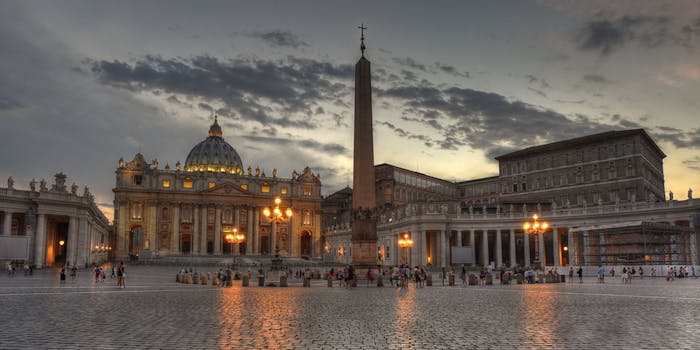 Priest recreates the Vatican using half a million Lego

Yes, that's a nun with a selfie stick.

Pope Francis is heading to the States next week, but will he get to see one man’s recreation of the Vatican?

Rev. Bob Simon used some very special bricks to recreate the Vatican: Lego. He told CBS Philly that he’s not entirely sure, but he thinks “there’s about half a million pieces in it.” The model includes a Lego Pope looking out over St. Peter’s Square, and a recreation of St. Peter’s Basilica. There’s also a nun with a selfie stick and, of course, a Lego version of Simon.

He claims he used a photo of the Vatican from a book to model the project on, as well as Google Earth and YouTube. His piece, which took him nearly a year to build, is currently on display at the Franklin Institute in Philadelphia, as part of an exhibit on the history of the Vatican.

The Pope doesn’t have plans to visit the exhibit, but he’s no doubt seen photos on Twitter.