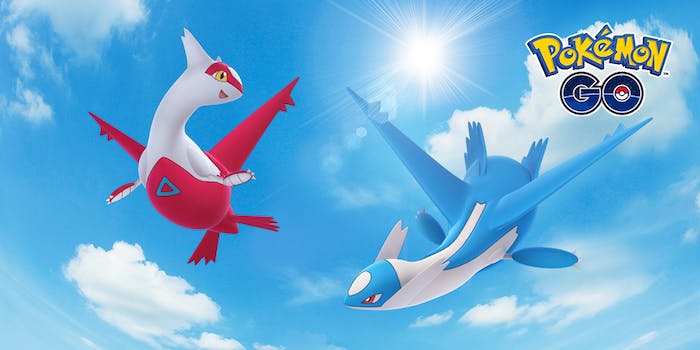 The announcement brings trainers one step closer to catching 'em all.

“Drawn to compassionate spirits, the Eon Pokémon Latias and Latios are known for being highly intelligent, and are able to communicate telepathically with humans,” Pokémon Go said in a statement. “They are also stealthy and extremely fast in flight—with Latias able to use its down to refract light to make itself invisible and Latios able to overtake jet planes. Make sure you encounter these special and elusive Pokémon while they roam during this limited time.”

Starting Monday, players in Europe and Asia will be able to fight Latias, the smaller of the two, in Raid Battles. Meanwhile, North American, South American, and African players can try to catch Latios. After May 8, they’ll swap regions, giving everybody a chance to complete the set.

Latias and Latios will be available on the game until June 5, according to Niantic.

Last week, the app also added research tasks and new in-game challenges for players to complete for rewards and implied that trainers may soon be able to capture the legendary Mew.