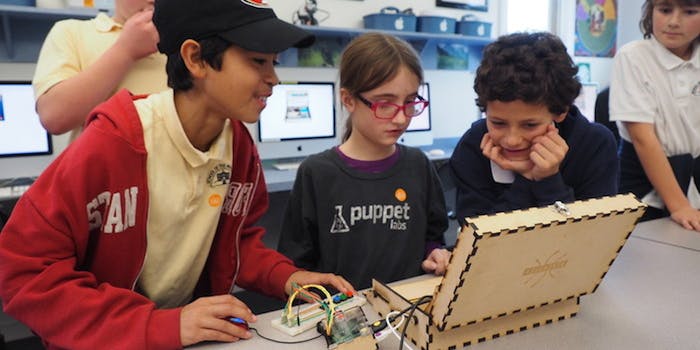 Young and old can get hands on with building as they play Minecraft.

If your kids love to build in the virtual world of Minecraft, why not encourage them to be engineers in the real world as well? A new Kickstarter campaign offering an innovative toolbox that combines the video game with the construction of actual electronics.

The toolbox is called Piper and is described as “a Minecraft toolbox for budding engineers.” As you assemble the customizable box, you can play Minecraft on an accompanying screen. The story follows a robot who becomes damaged while on an astronaut-rescue mission to a hostile planet.

Advancing through the game requires creating different projects that will aid the robot’s mission. Some of the projects highlighted by the crowdfunding campaign include building a controller to navigate through the game, adding switches to reveal secret doors, and more. There will apparently be more than 10 projects in the kit.

Since the board in the toolbox registers what you’re doing, you’ll be able to see how the results of your building change the game. It’s a neat idea that sounds fun for anyone, but it could be an especially great way to get kids excited about engineering, inventing, and how the fun of Minecraft can be applied to the real world.

You can learn more about the project on the Kickstarter website.

Photo via Piper: a Minecraft Toolbox for Budding Engineers/Kickstarter