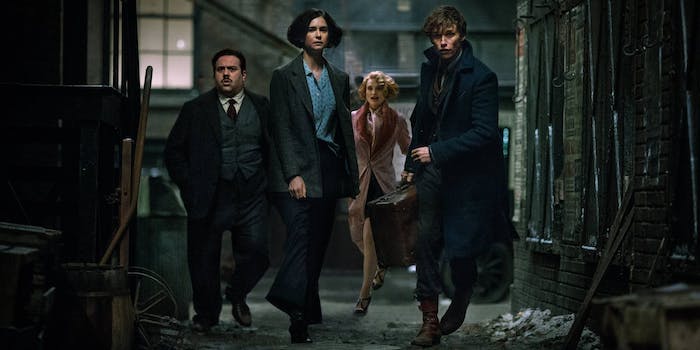 What do the character names in ‘Fantastic Beasts’ mean?

J.K. Rowling is known for choosing character names with hidden meanings, such as naming Minerva McGonagall after the Greek goddess of wisdom, or choosing constellation names for pureblood characters like Regulus and Sirius Black—Sirius being the dog star, to reflect his animagus form and the “black dog” of his depression.

This tradition continues in Fantastic Beasts, which has plenty of interesting names to get into.

Newt Scamander is the most obvious, named after newts and salamanders to signal his love of animals. Originally introduced as the author of Fantastic Beasts and Where to Find Them in the first Harry Potter book, Scamander was perhaps a fun, throwaway character to Rowling at the time. His middle names are Artemis, the Greek goddess of the hunt, and Fido, a popular name for pet dogs.

Tina (Porpentina) Goldstein is likely named after “porpentine,” an old word for porcupine, signaling her prickly nature but attractive qualities to Newt, a lover of strange and misunderstood creatures. Her sister Queenie‘s name—like naming a child Princess—fits her girlish, carefree nature. The name Goldstein means “precious stone,” and is a common Jewish name, although J.K. Rowling is yet to confirm the sisters’ heritage

Like the Goldstein sisters, Jacob Kowalski‘s surname suggests an immigrant background that fits with the 1920s New York setting—in his case, Polish. Kowalski means “smith,” which feels appropriate for his everyman role, while Jacob is a Hebrew name from the Old Testament.

Mary Lou Barebone has a distinctively American name, while the surname Barebone indicates the stark, forbidding nature of her role as the New Salem matriarch. Her daughters Modesty and Chastity have virtuous Christian names (hinting that Mary Lou probably renamed them after adoption), following the New Salemers’ links to puritanism. Credence means belief or trust (think “credulous”), a bittersweet name for a character whose trust is betrayed, and whose beliefs are forced upon him by an abusive parent.

Percival Graves may have the most interesting name in the movie. Inspired by the Arthurian knight Percival, who hunted for the Holy Grail, his surname hints at his darker, more dangerous side. His “grail” in Fantastic Beasts is the Obscurial, but in the long run, he represents chaos and death.