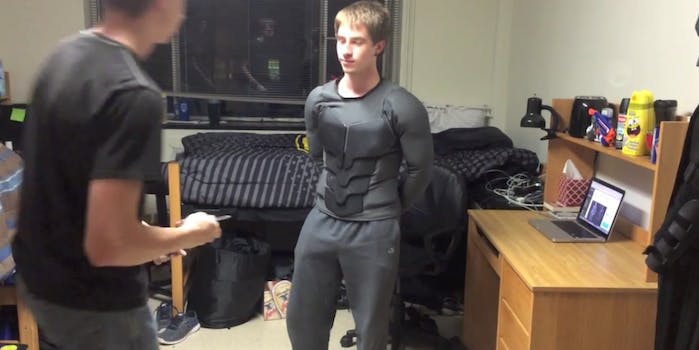 Don’t mistake this outfit for mere Batman cosplay. Gordon, who studies industrial design at Philadelphia University, has developed a combat suit built largely around Kevlar that can protect the wearer almost completely from knife slashes. The chest plate can handle determined knife thrusts and can also absorb punches such that a trained martial artist—like Gordon—can immediately respond with a knockout punch.

Gordon has posted a pair of YouTube videos to his Armatus Designs Facebook demonstrating some basic stress tests for the real-life Batsuit. In the first video, Gordon demonstrates how the basic suit material holds up against knife slashes.

In the second video, Gordon demonstrates a prototype of the chest plate. It stops a knife thrust dead. Punches still knock Gordon around a little, but one can imagine an assailant’s moment of surprise when a typical punch to the chest against the Batsuit does nothing. As Gordon demonstrates, that moment is all Batman would need to take someone down.

And in this video, Gordon tests not only the final version of the chest plate, but also the soft armor plates around his ribs and shoulders, while taunting the kid who is punching away at the Batsuit.

Gordon’s Batsuit won’t stop bullets, but that doesn’t make it any less authentic, because neither does Batman’s, really.

Gordon raised the money for his Batman-themed combat suit via a Kickstarter campaign launched on Dec. 10. That’s a pretty quick turnaround to bring a piece of comic book fiction into the real world.

Now we look forward to seeing what Gordon does if and when he gets the funds to upgrade his car into something also worthy of the Batman. Assault rifles and rocket launchers (we hope!) will make for some awesome real-life Batmobile stress-test videos.