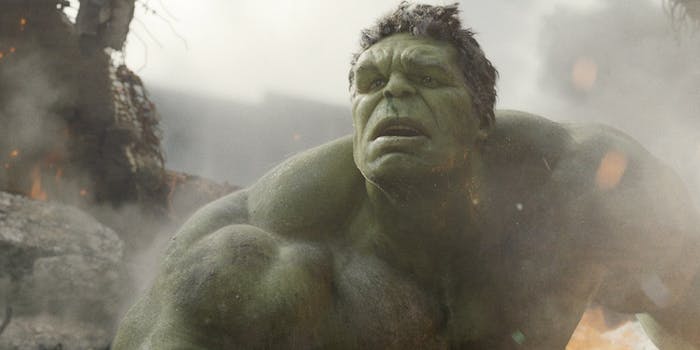 But do we really want another Hulk movie?

Rumors of a new Hulk movie are surfacing once again.

Speaking to Digital Spy this week, Mark Ruffalo said, “I think they are, for the first time, entertaining the idea of it. When we did The Avengers it was basically ‘No!’, and now there is some consideration for it. But there’s still nothing definitive, not even a skeletal version of what it would be. I look forward to going down that road, if we could crack that nut.”

Ruffalo gave a great performance in Avengers, bringing new life to a character that many fans had previously proven difficult to adapt for adult audiences.

Ang Lee’s Hulk was deemed unsuccessful enough that Marvel Studios rebooted it five years later, but the resulting Incredible Hulk failed to reach the same level of success as movies like Iron Man and Captain America. Unhappy in the role, Edward Norton was replaced by Ruffalo for The Avengers.

Last year, Avengers director Joss Whedon spoke about the difficulties of casting the Hulk as a protagonist instead of in a supporting role. “The Hulk is the most difficult Marvel property because it’s always about balance. Is he a monster? Is he a hero? Are you going to root for a protagonist who spends all his time trying to stop the reason you came to the movie from happening?”

In other words, even if Mark Ruffalo is the most successful Hulk so far, Marvel would have to hire a writer and director who really understood the character.

It’s difficult to see the idea of a new Hulk movie as anything other than a money-making exercise. Like Spider-Man, the Hulk is enough of a household name that a new movie automatically has an audience. The question is, does Marvel’s cinematic universe actually need a new solo Hulk movie? It certainly doesn’t fit in with their recent model of publicizing comparatively obscure characters like Guardians of the Galaxy.

If a new Hulk movie does indeed happen, it will almost certainly be a box office success thanks to the Avengers connection. Whether it will actually be good is another matter entirely.

A Hulk-centric movie would be a conservative choice, not just financially but also from a storytelling perspective. After all, Black Widow is still waiting in the wings, along with plenty of other Marvel heroes who don’t fit the traditional mold of endlessly rebooting the same reliable white male comicbook characters over and over again.