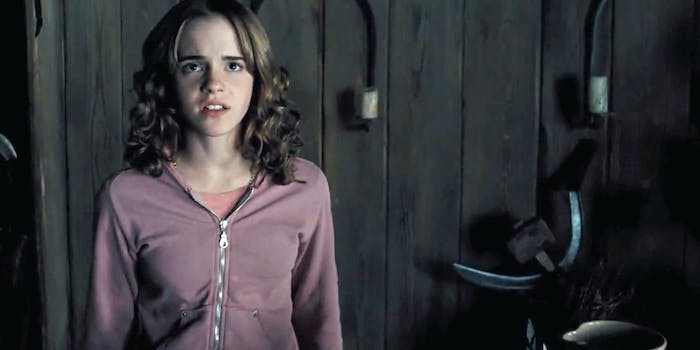 A little communist solidarity from behind the scenes of 'Harry Potter.'

Is there no end to the hidden messages in Harry Potter? Twitter user Hezbolsonaro spotted a hammer and sickle in the background of Harry Potter and the Prisoner of Azkaban, and now ironic communist meme Twitter is all over it. Apparently the hammer and sickle are present for part of the scene and then vanish later on.

Since this all takes place in Hagrid’s hut, the obvious response is “You’re a comrade, Harry.” For a brief moment, J.K. Rowling’s centrist politics were subtly undermined by (we’re guessing) someone on the film’s set-dressing team.

For those who aren’t aware, the hammer and sickle are a longtime symbol of working-class solidarity, starting with the Russian Revolution in the early 20th century. You probably recognize it from the red flag of the Soviet Union, and it still appears on communist flags worldwide. The sickle represents farmers while the hammer is for industrial workers.

Given that the Harry Potter prop is in the same position you usually see it on flags, we’re pretty sure this was intentional rather than a weird coincidence. A little note of solidarity from behind the scenes on a huge Hollywood franchise.

See the moment below, around 42 seconds into the video: