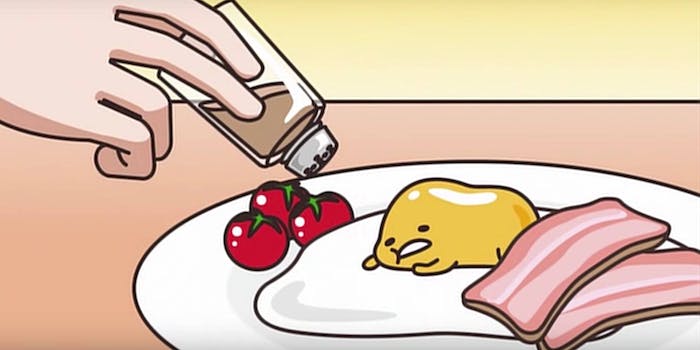 The Sanrio character with the most hustle just happens to be its laziest.

A cartoon man in a gold ochre bodysuit wiggles and wobbles as school children cheer him on, chanting the name of a character whose energy levels pale in comparison. Kachi kachi—wooden castanets—are clicking and all is right in the world of Gudetama, the “lazy egg” reinventing Sanrio, the Japanese company behind Hello Kitty.

The character stars in a series of videos that conclude and are occasionally bookended by such theatrical antics. The footage is typically devoid of action—at least on Gudetama’s part. What does change is how Gudetama is served. He tends to be prepared over easy, though there are times that he’s squished into a sweet omelette form a la tamagoyaki or trapped in an egg cup, hard-boiled and confused. The “tama” suffix is certainly well represented: Tamago being the Japanese word for egg.

He’s holding up the “gude” end of his name as well. Whereas English onomatopoeias typically just denote noises, Japanese equivalents span the emotional spectrum. And “gude” is the meek cry of apathy anchoring Gudetama’s persona.

Tracing Gudetama’s history is about as complex as keeping up with the influx of merchandise his nonplussed face has been emblazoned on. Thanks to a partnership with Korean cosmetics company Holika Holika, the swag doesn’t show any signs of stopping.

No style of product has been left untouched by a character, whose name denotes the exact opposite of a savvy businessperson with a whole lot of hustle. Gudetama has had his own pop-up restaurant, cafe, and even his own dessert. It’s these pooping and vomiting pastries from Hong Kong’s Dim Sum Icon that perfectly encapsulate the aesthetic Sanrio unwittingly tapped into when Gudetama burst on the scene following an in-house mascot creation contest.

The 2013 contest culminated in Gudetama coming in second place, with a wobbly-headed salmon fillet known as Kirimi-chan receiving a majority of votes from the public. As with a large chunk of Sanrio characters, Kirimi-chan perfectly encapsulated the kawaii (cute) charm of its brand, falling perfectly in line with the concept of classic yuru-kyara—that is, a mostly silent, incredibly pleasant mascot more innocuous than edgy.

The saccharine sweet aesthetic has netted Sanrio quite the profit since Hello Kitty hit the scene in 1974. Two decades later, the slow simmering backlash of such characters would culminate in the kimo kawaii (gross cute) movement that have vaunted the likes of Gudetama and the comical small middle-aged man Chicchai Ossan to prominence. Despite the popular vote, Kirimi-chan has fallen prey to changing attitudes. A side-by-side comparison of Twitter followers between the salmon fillet and Gudetama shows the lazy egg with well over twice as many fans.

The artist behind Gudetama happens to be a young woman who’d only joined Sanrio the year before concocting him. Known as Amy—a play on her real name, Emi—she graduated from Joshibi University of Art and Design in Kanagawa Prefecture. The prestigious private school is the alma mater of Hello Kitty illustrator Yuko Yamaguchi, who’s the iconic Sanrio character’s third such designer.

In an interview with the Japanese blog greyme, Amy stated that “the character is intended to reflect the era we live in,” likening motivation to poison for Gudetama and marveling at his worldwide fame. She’s repeatedly expressed shock at the level of popularity Gudetama and his laziness has achieved, admitting that she wasn’t sure if Sanrio would accept her design into the 2013 contest.

Gudetama’s been faced with a few hardships, such as when Sanrio banned the character from its Puroland theme park in Tokyo after causing quite the commotion while lying down during parades, among other offenses. Sensing the tide change in what its consumers want, the company couldn’t help but relent, however.

The slow-moving character that’s fast taking over may very well sit at the top of Sanrio’s food chain by end of this year’s character ranking contest. Fans have until June 19 to cast their ballots. As of this writing, Gudetama is in third place. He may not be doing much campaigning, but what else would you expect from a lazy egg?