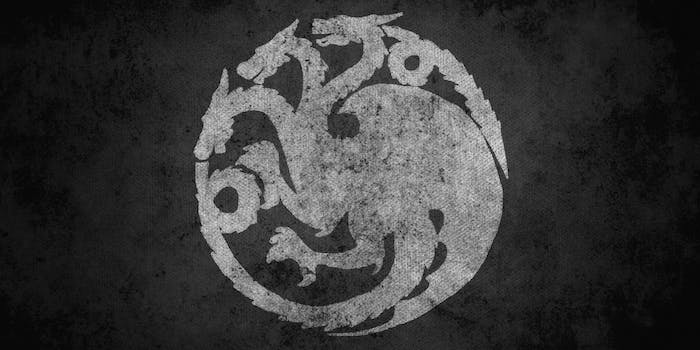 How George R.R. Martin’s ‘bittersweet’ ending to ‘A Song of Ice and Fire’ could play out

It's not a happy ending, for sure.

This contains spoilers for A Song of Ice and Fire.

George R.R. Martin has been fairly tight-lipped about how A Song of Ice and Fire will ultimately end, but a new interview reveals more of what that ending may entail.

Speaking to the Observer earlier this week, Martin once again called the tone of the ending “bittersweet” and uses J.R.R. Tolkien and the Lord of the Rings trilogy, one of his major influences, to elaborate on what he’s going for.

“I mean, it’s no secret that Tolkien has been a huge influence on me, and I love the way he ended Lord of the Rings. It ends with victory, but it’s a bittersweet victory. Frodo is never whole again, and he goes away to the Undying Lands, and the other people live their lives. And the scouring of the Shire—brilliant piece of work, which I didn’t understand when I was 13 years old: “Why is this here? The story’s over?” But every time I read it I understand the brilliance of that segment more and more. All I can say is that’s the kind of tone I will be aiming for. Whether I achieve it or not, that will be up to people like you and my readers to judge.”

In a sequence ultimately cut out of the film, the Hobbits return to the Shire to find everything in disarray: Saruman has taken over after removing from power one of Frodo’s relatives—who already made a mess of things—while Ruffians and Orcs bully those who aren’t imprisoned. Frodo, Sam, Merry, and Pippin, each veterans of the War of the Ring in their own right, gather a good number of Hobbits together to fight them off in the Battle of Bywater. Saruman and Wormtongue both die as a result, the Ruffians and Orcs are driven out of the Shire, and everyone is able to begin to heal.

After our heroes won the ultimate battle, some feel it’s almost a step back to then go to yet another battle, one on a much smaller scale but with even higher stakes for the Hobbits. But it demonstrates a very important point: The home you left won’t ever be the same once you return. And as Frodo learns later on, sometimes you change too much to step back into your old life.

That’s not to say that ASOIAF and Game of Thrones will end with a much smaller battle that may end up feeling more anticlimactic than anything, but with the stakes so high for so many of the characters, there’s no way that any of them will truly come out of the series unscathed. (And that’s before they face the true threat to Westeros: the White Walkers.)

However, we still have two more books until we reach that point. With everyone’s fate still unclear, we try and speculate just how bittersweet that ending could be for some of our favorite characters.

A longstanding theory in fantasy (but not limited to ASOIAF) is that the heroes lose the thing or person they love most—basically the very essence of themselves. We’ve already seen it with Ned and Catelyn Stark, Cersei and Jaime Lannister, and Theon Greyjoy just to name a few.

As one of the only characters still vying for power both in the books and the show, Daenerys has the most to lose in the series. It’s part of her many titles: Mother of Dragons.

The dragon may have three heads, but that doesn’t guarantee victory. Drogon, as Daenerys’s clear favorite, would likely be the one most likely to die just because it’d hurt her the most. But would it because of some sort of dragon illness, or due to someone’s cruel and murderous act?

We’ve seen it before in frequent Game of Thrones companion The Princess Bride. Inigo Montoya, having finally killed the six-fingered man who killed his father, made it out of the encounter alive with his entire life ahead of him.

Arya, still clinging onto her hatred of the people who wronged her and her family, will probably never be able to truly become No One as long as she holds onto her hate. So whenever that day comes, she’ll still be Arya Stark but she’ll never be able to settle back into life as a reluctant lady (or even like a knight like Brienne of Tarth).

We’re unclear of how much power and influence Bran will have under the tutelage of the Three-Eyed Raven. He can speak through the Weirwood tree in the past, present, and future, but his words are only a faint whisper.

Many people believe that Bran will become powerful enough to skinchange into one of Daenerys’s dragons, but what if he sees the fate of the world but is powerless to stop it? He can fly, but it won’t do any good.

4) Brienne will discover that Jaime was right about knighthood

Brienne initially dislikes Jaime because he broke his oath to protect King Aerys II Targaryen by killing him—an act that probably saved the Seven Kingdoms from his cruelty. Jaime points out that as a knight, you end up swearing so many oaths that eventually some of them are going to contradict each other.

At the end of A Feast for Crows, Brienne is faced with a major conundrum when she meets Lady Stoneheart: bring Jaime to her or be killed. She can’t reason with Lady Stoneheart that Jaime is a changed man—and he even helped her in her journey to follow her oath to Catelyn. We then see in A Dance With Dragons that she found Jaime and appears to bring him to Lady Stoneheart.

She may eventually find Sansa or Arya (something she’s already done in the show). She might also get her revenge on Stannis Baratheon, as she also did on the show, to fulfill her oath to Renly. But it would be at the cost of betraying Jaime and his trust. Oathkeeper no more?

But knowing Martin, it could be even more devastating than we could ever imagine.