Do these ‘Game of Thrones’ spoiler videos violate DMCA?

HBO is trying to stop this YouTuber from discussing 'Game of Thrones' spoilers.

Game of Thrones has already revealed a treasure trove of twists and turns this season, but some fans are learning about the big plot points in a more preemptive manner. And HBO is using its might to try and stop it.

After four episodes of Game of Thrones leaked last year, HBO isn’t pulling any punches when it comes to preserving those reveals for the audience. For the first time in the show’s history, HBO didn’t give out any Game of Thrones preview screeners—and the only person who might have one is President Barack Obama. In the midst of the top-secret (albeit widely guessed) operation to bring back Jon Snow to the show, nobody was allowed to say Jon’s name on-set and he was referred to as “LC” in scripts and call sheets. Showrunners David Benioff and Dan Weiss have spoken out against spoilers and don’t understand why people seek out spoilers when they believe that knowing things ahead of time “lessens the experience of watching it.”

“It’s crazy enough to be the person crawling through the bushes in Northern Ireland with a telescopic lens taking pictures—there are crazy people out there,” Benioff told Entertainment Weekly. “But the idea that people want to go to sites and find out those spoilers … it’s like if there was a website called Last Pages of Great Books, would you read that?”

While a number of fans do fall in line with Benioff and Weiss’s line of thinking and don’t want to know about things beforehand, that’s not always the case. Some like reading and discussing spoilers, particularly in the context of the show while others took issue with Benioff and Weiss shaming fans for seeking out spoilers and assuming everyone felt the same way as they do.

For the smaller portion of fans who want to know what’s coming up in Game of Thrones this season, they have Jose Señarís, a scriptwriter and surgeon based in Madrid, better known online as Frikidoctor. Over the past few weeks, he has posted a series of YouTube videos that have revealed the major plot points on Game of Thrones days before each episode airs. He gets the information from a source he won’t reveal (but jokes it’s actually President Obama).  And so far, he’s been spot-on.

For example, he revealed in his video for “Home” that Jon would be resurrected, the Stark introduction in Bran’s vision, Ramsay’s cruel murders, and Tyrion wouldn’t have anything to worry about from Rhaegal and Viserion. His video for “Oathbreaker” spelled out how the Tower of Joy scene would play out, the return of Rickon Stark and Osha, and Jon’s actions against the Night’s Watch mutineers. Though new fans are clamouring for his spoilers, Señarís has received multiple Digital Millennium Copyright Act (DMCA) takedowns from HBO over copyright infringement.

Initially, Señarís explained to r/freefolk—an unmoderated subreddit that doesn’t mark spoilers or have an outright ban on piracy—that he used trailer footage and photos available to the public in his videos while he spoke about the episode summaries he received. He figured it would qualify under the fair use doctrine, which has a four-part test for those using copyrighted material, but he claimed that his videos were manually flagged for copyright infringement by HBO and received a strike from YouTube for it.

“Two hours after that I uploaded two clips, one in Spanish and one in English with the same spoilers, and they did not do anything,” he wrote.

For the third episode, “Oathbreaker,” Señarís decided not to use any promotional footage, photos, or audio in his video. He called the spoilers “predicciones,” or “predictions,” instead of using the word “spoilers.” On May 6, he uploaded that video, and that soon was taken down by another DMCA claim from HBO. (The spoilers ended up on Reddit anyway.) 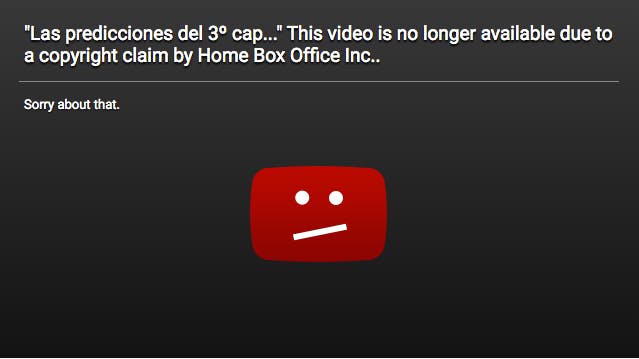 “Despite not using any picture or sound belonging to HBO; simply because the things I’ve said, the video has been removed,” he tweeted, according to a translation.

Señarís declined to be interviewed for this article.

He discussed the takedown in a subsequent YouTube video posted to his channel, pointing to other instances of spoilers as well as set photos and video that have yet to be taken down by HBO. (That video contains specific mentions of spoilers if you wish to avoid them.) He revealed that he had talked to a lawyer specializing in copyright law, and even posed the question to Reddit.

‘If it’s just me talking, can they claim that it’s copyrighted content? Isn’t that misuse of the DCMA [sic]?”

Some of the people in r/freefolk also believe that HBO is “abusively misusing the copyright infringement system.” One redditor, who identified as a full-time YouTuber and gamer, said this is a reality many people face on YouTube, and there are even companies who take advantage of the loopholes in the system.

“It doesn’t matter if you use footage, pictures or anything (even though all of that is protected under fair use),” BlameTC wrote. “Youtube will ALWAYS side with the accuser regardless of how many false claims they have made, there is no punishment for this, which is how those above mentioned companies kept doing it and made so much money.”

YouTube’s system for flagging copyrighted videos favors the accuser, so videos that fall under public domain or fair use (and even some that don’t contain any copyrighted material) are taken offline by mistake. Those who feel their videos were wrongly removed can appeal, but the process is long, arduous, and limited—as well as potentially financially crippling for content creators who are unable to monetize the videos they produce to make a living.

Last year, Melissa Hunter’s webseries Adult Wednesday Addams was removed from YouTube over a copyright infringement claim from the Tee & Charles Addams Foundation despite appearing to fall under Fair Use. The series has yet to be restored to YouTube.

But can HBO successfully flag a video for spoilers and leaks when all someone does is talk about them?

The Daily Dot contacted HBO for comment, and will update if there is a response.

In Señarís’s case, it appears not. He filed appeals with YouTube, which restored the videos were removed on Monday after the takedowns were covered by sites like Tech Insider and The Next Web.

“I announce that @ YouTube has taken into account my counter, has given me back videos, and has withdrawn strikes me the channel,” Señarís said in a translated tweet. He also thanked r/freefolk for their support.

The spoilers live online, but HBO’s attempt to remove them before everyone watched the Game of Thrones episodes succeeded. But with more attention on Señarís’s channel, even more eyes will be on him if he decides to upload a video on the major points of next week’s episode—especially HBO’s.