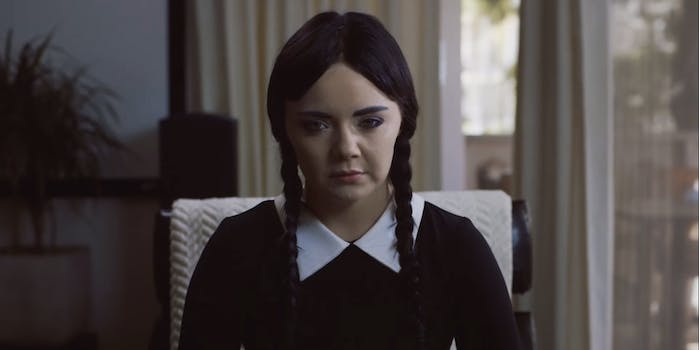 It's creepy and it's kooky, and now it's gone.

This past weekend, Melissa Hunter—the driving force behind the popular webseries Adult Wednesday Addams—took to Facebook to inform fans that, after being flagged by the Tee & Charles Addams Foundation for copyright violation, the series had been pulled from YouTube. Hunter explains:

“Obviously, this is very upsetting that the videos aren’t online. Wednesday means so much to me as I know she does to you. Thank you for all of your enthusiasm. Your support every step of the way has meant the world to me.”

By the end of its eight-episode second season, Adult Wednesday Addams had racked up over 8.5 million views—a giant achievement for such a small production. The series followed the adventures of recent L.A. transplant Wednesday Addams as she attempted to navigate the culture of reality shows, kale smoothies, and hikes to the Hollywood sign. Her most well-known episode, in which Wednesday teaches an unforgettable lesson to catcallers, gained international press coverage from publications such as Marie Claire, People, Huffington Post, and BuzzFeed. Hunter’s latest update explained to fans:

At this point, the Tee & Charles Addams Foundation cannot do anything to change the status of this issue, so sending messages and donations will not remedy the situation. If there is anything that can be done in support of the series, I will let you know. Thank you again for everything!

While speculations have been made that this takedown is due in part to MGM attempting to reboot the beloved series into an animated movie, the studio has not spoken out about this project since the original announcement was made in October 2013.

It’s a shame the Tee & Charles Addams Foundation is unable to see the merit in supporting fan-made content on YouTube. Let’s take Batman and Aquaman for example. Every online video made about these characters, from parodies to fanfiction, has only made them more beloved by their fans. And the more beloved the character is, the more people are bound to go out and watch the movies, musicals, and television series being made about them by large production companies. Especially for iconic characters who are not readapted to the silver screen often, YouTube is vital in keeping those characters—such as Wednesday—relevant and relatable to the younger generation.

The outpouring of support for Hunter has been overwhelming but not surprising. This series was not only very popular, but also an incredible victory for the often overlooked community of female comedians on YouTube. As I’ve previously gushed about in my #WCW article on Hunter, her work has been pivotal in showing other women that one does not need to compromise their creative projects to gain a loyal audience on YouTube.

Worst case scenario, there is no doubt that Hunter will move forward to make yet another wonderful series. And while the series might be off the air for the foreseeable future, fans of the show will continue to hope that someday Adult Wednesday Addams season 3 will become a reality.

Clarification 7:24am CT, April 22: The language surrounding the proposed MGM movie deal has been clarified since publication.