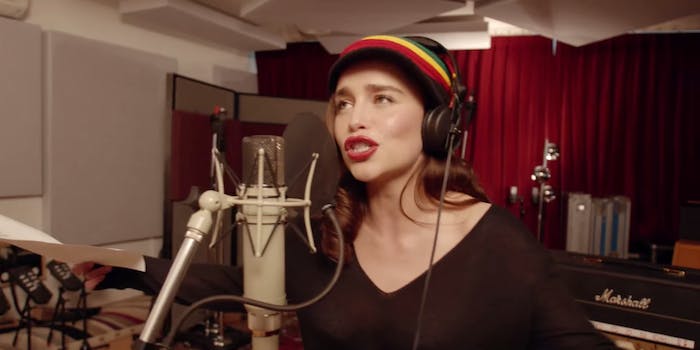 Because she's a Rastafarian Targaryan.

This year’s Red Nose Day, the annual U.K. comic charity event that has thankfully spread to the U.S., is proving to be the gift that keeps on giving for Game of Thrones fans.  Coldplay‘s “Game of Thrones musical” gag has already roped in stars Peter Dinklage and Nikolaj Coster-Waldau in renditions of, respectively, “Still Goin’ Strong” and “Closer to Home.”

Now, Emilia Clarke has joined the roster of Westeros denizens who’ve stepped out of their roles. This time, she’s leading a rousing Rastafarian singalong. Because she’s a Rastafarian Targaryan, get it?

Daenerys’ big showstopper was released earlier Thursday as the last teaser for the full performance of the musical, which will be broadcast with the live Red Nose charity event on NBC tonight at 8:00pm ET.