I watched the ‘Game of Thrones’ season premiere with 7,000 fans

When you gather 7,000 Game of Thrones fans for a screening, it will be epic. It is known.

“Do you want to get stabbed?”

I was talking to a woman dressed as Roose Bolton as she showed me her fake, springing knife. Dressed with the detail fans would appreciate, she was with a group that would have never assembled in the novels—Tulisa, Brienne of Tarth, Melisandre, and Ygritte.

They cosplayed for a very special occassion: HBO’s Game of Thrones Epic Fan Experience on Thursday night in Brooklyn. Those who dressed up for th event got plenty of attention from the crowd. I couldn’t help but ask for a photo, to which this Roose Bolton generously agreed and offered to stab me.

Why the hell not, I thought. I put on my best Robb Stark at the Red Wedding-worthy face (which probably isn’t that great) and tried to hide my excitement as she gutted me. 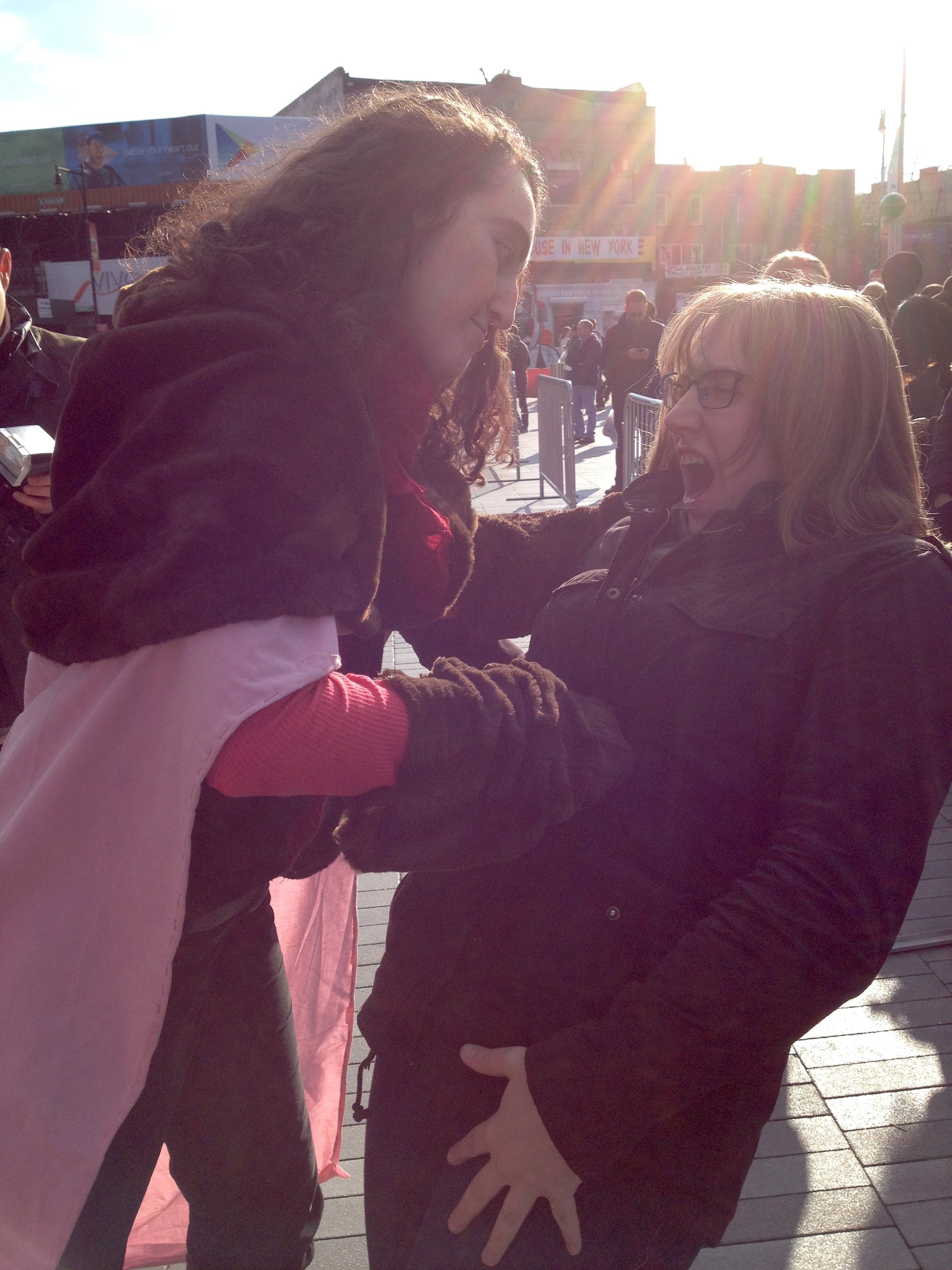 HBO premiered the new season of Game of Thrones for VIPs at the Lincoln Center on Wednesday night. Then on Thursday, HBO hosted a screening for 7,000 lucky Game of Thrones more than two weeks before the new episode airs on TV. Tickets sold out in minutes for the first-of-its-kind event. HBO promised surprises for fans, an opportunity to view outfits from the traveling exhibition, and a photo op on the Iron Throne

Fans started gathering at the Barclays Center as early as 3pm and security was tight to prevent the episode from leaking early. Fans had to check in their phones almost as soon as they arrived—even before they were allowed to wait in line at the main doors.

They really mean it with the “no electronics” policy. But it’s a fair trade off. pic.twitter.com/yaUAy6WFHC

There weren’t many cosplayers, aside from the ladies of Westeros mentioned above, but there were plenty of people donning T-shirts and hoodies announcing their house loyalties, including a rather tongue-in-cheek illustration of The Twins that read, “I’m with the band.” Fans of the books and the TV show alike talked about how strange, yet somewhat liberating, it was to not have their cell phones. To pass the time they speculated about what might be in store for the new season. 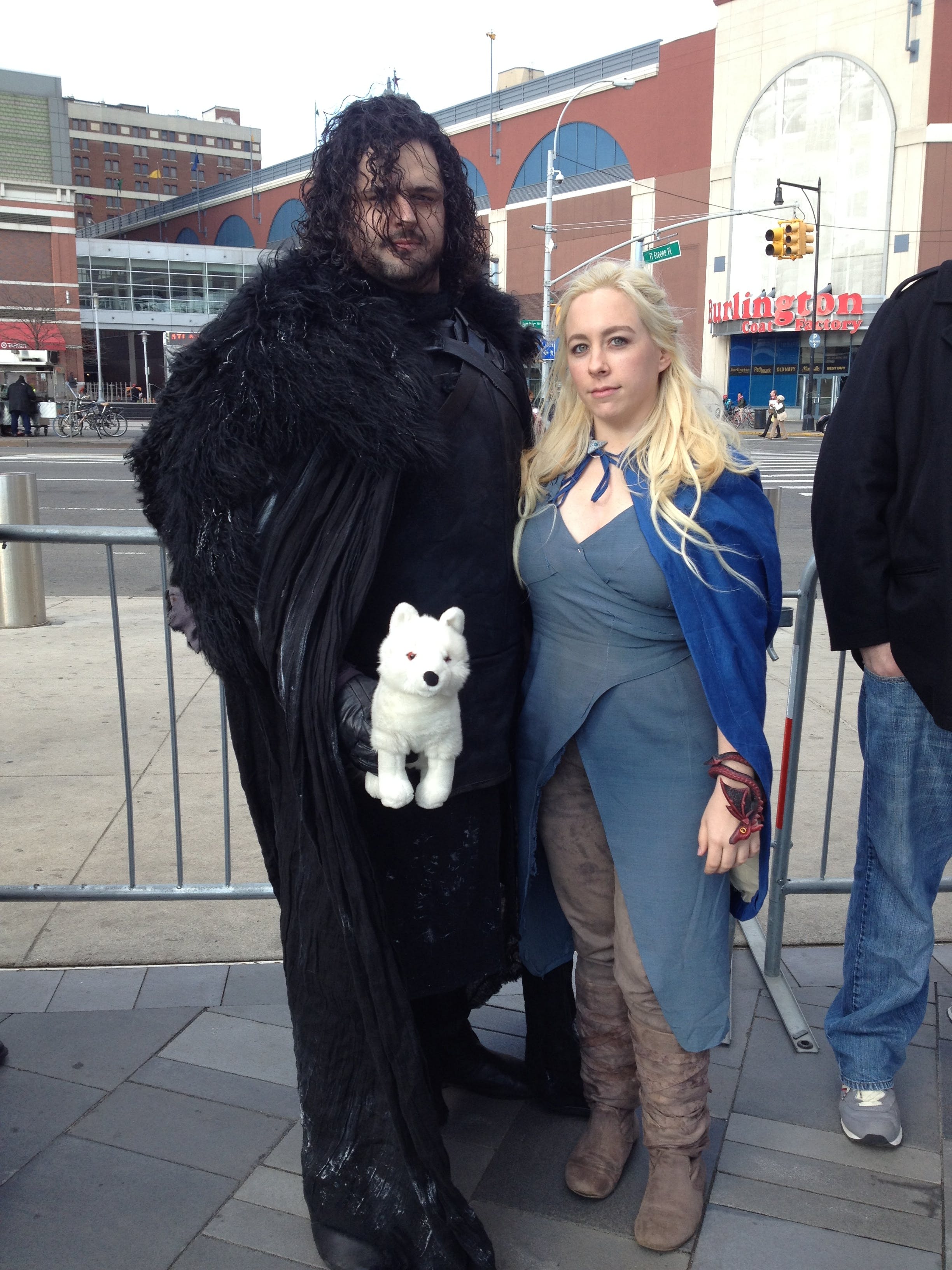 Once the doors opened, it was a free-for-all as fans walked around the arena. HBO’s “Catch the Throne” SoundCloud mixtape played on repeat while people explored and picked up swag. There was more than two hours to kill before the festivities began, so I got in line for my photo op on the Iron Throne. The wait was long, but it’s not often you get the chance to sit on the Iron Throne without having to kill a king or two to get it.

Fans who found their seats early caught performances of the show’s theme song from a  marching band and “The Ladder” from rapper Common.

Around 8pm, the main event started and the first surprise was a jaw-dropper: A Song of Ice and Fire series author George R.R. Martin himself.

“Tonight is for you!” Martin said, stepping onstage to a roaring crowd.

He was soon joined by Maisie Williams (Arya Stark), John Bradley (Samwell Tarly), and Sibel Kekilli (Shae) for a Q&A session with “the most talkative man in Westeros,” Kristian Nairn (Hodor). Kekilli couldn’t believe the size and enthusiasm of the crowd and uttered a “Holy shit!” once getting her microphone.

Martin has been getting more flack than usual from fans who want him to hurry up and finish writing The Winds of Winter, the next installment of the book series. He and Nairn acknowledged it before they got to any questions, a mix from Nairn and fans on Facebook.

Nairn: George, let’s start with you.

Martin: I’m working on it!

The Q&A didn’t venture very far into spoiler territory. The cast members guessed what songs would be on their characters’ playlists, discussed Arya’s desire to kill Joffrey Baratheon ”in the most humiliating way” as the No. 1 target on her hit list, and Bradley’s favorite part of filming: “Kit Harington’s big brown eyes.”

Martin said many of his characters and scenarios, such as the Red Wedding, are based on historical figures and events. He joked that Tywin Lannister was based on Vladimir Putin, which drew laughs from the crowd.

He then surprised the audience by giving away an Iron Throne, which is worth approximately $30,000, to one lucky member of the audience just because.

We’re silencing our ravens for the evening at #GoTEpic @barclayscenter. Thanks for following along. pic.twitter.com/74Nib0L5Dk

There’s not much I can say without going into spoiler territory—I won’t be that cruel to you—but in general, there are new characters introduced, new cities, and none of the events of last season will be soon forgotten. There’s even a couple of nods for astute book fans, and there’s more than one scene that caused the audience to erupt in cheers and applause.

I was located in the very back of the arena, so I had a full view of the entire arena filled with enthusiastic Game of Thrones fans. It just won’t be the same when I rewatch the episode on my TV on April 6, both for the scale of the screen and the audience.

And fans weren’t disappointed by the episode or the show put on by HBO.

“[T]hey could have easily sold tickets at double the price of what they went for, and still sold out the center, but they kept them affordable,” Poncho Community Manager Annalise Domenighini told me by email. “I love when a show treats its fans well, because it makes us feel so much more connected to what we’re watching, and HBO/Game of Thrones doesn’t disappoint.”