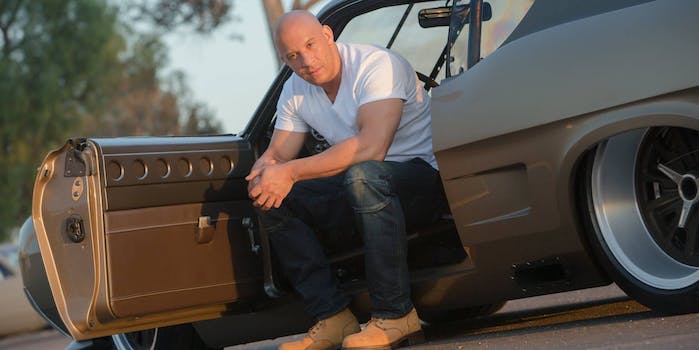 Photo via Fast and Furious/Facebook

Here’s the thrilling first trailer for ‘Fate of the Furious’

Eight movies in, the 'Fast and Furious' franchise is still getting bigger.

The eighth Fast and Furious movie has a title worthy of a Homeric epic: Fate of the Furious. Its first trailer is suitably dramatic, teasing massive sequences and an unexpected twist for Dominic Toretto (Vin Diesel).

In case you didn’t notice during the previous seven movies, the Fast and Furious franchise is all about family. (They repeat this several times in the trailer, just to make sure you remember.) So, it’s pretty shocking to see Vin Diesel betray his family and hook up with Charlize Theron’s new villain character.

Does this give us a new explanation for the possibly-manufactured feud between Vin Diesel and the Rock while they were filming this movie?