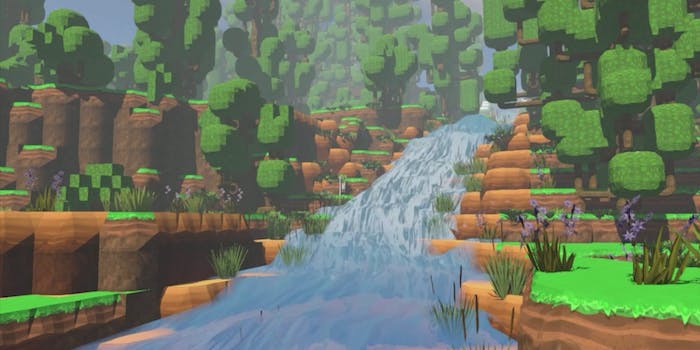 Eco is Minecraft with an environment-friendly agenda

Building virtual civilizations to learn how to save real ones.

Considering the implications of chopping down an entire forest or mining out all the coal in a game of Minecraft would make the game’s universe a much more thoughtful place.

Eco, an online game designed for middle school students is described as a “collaborative environmental science game.” In Eco, unlike in Minecraft the resources that players extract from the environment are not simply static blocks with no effect on everything else in the world. The resources are part of a living ecosystem. That means chopping down an entire forest to build houses can have adverse effects on the rest of the ecosystem players need to harvest for their next construction project.

Strange Loop Games, the studio that developed Eco modeled the game after the type of environment one finds in the Pacific Northwest. Players can collect data to measure the effects of construction on the environment, and propose laws to limit negative effects on the biosphere from resource harvesting. The game is designed to be played both in the classroom, and on the students’ own time, to balance discussion of laws and rules with carrying out construction projects.

Eco is currently listed on Steam Greenlight, the community tool by which Steam users can decide which new games ought to be fast-tracked for distribution. While the video above stresses the educational value of the game, the Greenlight page links back to a description that details Eco’s metagame, a race against time to save humanity from an impending disaster by constructing an infrastructure that would allow humanity to survive the cataclysm. Gathering the resources to build this infrastructure could have the effect of destroying the environment, which makes pointless trying to save the world in the first place.

Perhaps Strange Loop Games backed off from the whole doomsday scenario thing in its promotional video because humanity doesn’t require any outside assistance from Mother Nature in order to destroy her. Depending on which real world scientists you listen to, that’s a task humanity has already gone some way to completing. Eco teaches kids that a little forethought can go a long way toward not making the current situation any worse.