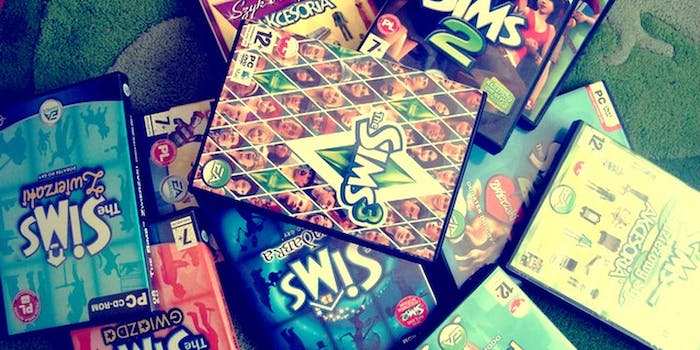 The Sims 2 is discontinued, but that means you can get it for free until July 31.

A week after announcing it was discontinuing support for Sims 2, EA games has released the game for free online—along with every expansion pack ever made for it.

The studio is releasing the older version of the game along with a whopping 17 expansion packs. That means that from now until July 31, you, too, can experience the wonders of the famed Ikea expansion pack, and the many other dubious Sims 2 glories that made Steve Hogarty an Internet folk hero.

Plus, you know, getting the Sims without having to pay for it is pretty nice, too. EA has helpfully written a step-by-step guide to how you can get the game. You need to be a member of EA’s Origin gaming network, but once you’ve gotten your free Origin membership, you can hop right in to the Sims by choosing “Redeem Product Code” from the Origin menu, and then entering the product code I-LOVE-THE-SIMS.

Sure, the game is a few years outdated, but by throwing in all 17 expansion packs as well, EA is providing you with a considerable deal on game features.

EA is also running a special free “On the House” promotion on an older version of the popular puzzle game Peggle.

Although most of the promotional efforts for EA are focused on gearing up for the fall launch of Sims 4, with its enhanced customization and emotive features, making the older version available for free is a great way to interest the larger community in the game. Whether you’re new to the Sims or just experiencing a wave of nostalgia, you have until the end of the month to acquaint yourself with the virtual world where characters communicate in thought bubbles and speak in “Simlish.”