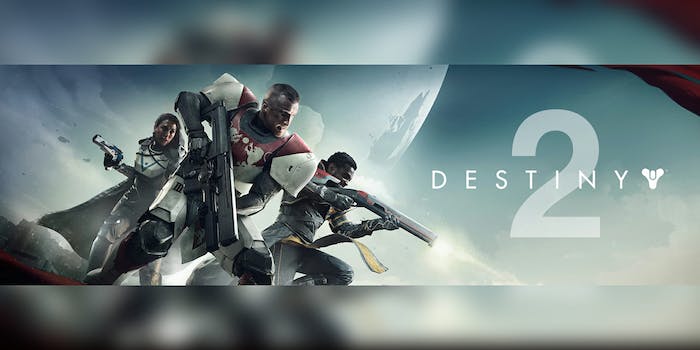 All the details you need to get ready for Destiny 2

Make sure your Guardian is ready to take on a dangerous galaxy in this much-anticipated sequel.

Bungie’s MMO-lite shooter Destiny is arguably the biggest game of the current console generation. After launching in 2014, multiple expansions and updates added new enemies, weapons, and gear for players to work together to find. However, it was always rumored that something more was in store for the Destiny experience. That answer was recently unveiled in the form of Destiny 2, a full, proper sequel coming later this year.

We only have a few short teasers and some posters to go off, but with E3 and an open beta approaching, we expect to learn a lot more about Destiny 2 very soon.

Get the scoop on everything we know know so far about the game below.

Much like the first title and all of its subsequent add-ons, Destiny 2 will be landing in September—Sept. 8, to be specific. Unlike the first game, the sequel will be making its way to PC this time around. Since Bungie doesn’t have its own client for publishing games on the platform, it is likely that the game will be made available through Steam, like most Call of Duty titles.

The standard edition will run an expected $59.99 and include the base game. From there, it gets more complicated depending on where you want to preorder the game and if you choose to go digital. A $100 Digital Deluxe Edition adds on the Expansion Pass as well as a legendary weapon, emblem, and emote. A physical Limited Edition also runs $100 and includes an art book and steelbook case.

For more dedicated Destiny players, a $250 bundle is offered, including everything in the Limited Edition as well as a themed messenger bag. The case can hold most 15-inch laptops and comes with a solar-powered USB charger. For any fans who pre-order any version of the game at GameStop, a mini-figure of Cayde-6 is thrown in as an added bonus as well.

Speaking of the Nathan Fillion–voiced robot, he was the first confirmed returning face in the very first teaser for Destiny 2. It seems that he will be playing a more prominent role this time, recounting the events that passed between the two games.   Lance Reddick’s Commander Zavala is also coming back, providing a more serious counterpart to Cayde’s light-hearted musings. These two heroes featured prominently in the first major trailer for Destiny 2, introducing the new threat.

Also hinted at in this trailer was the fact that all the gear players collected in Destiny won’t be carried over to the sequel. The Guardians’ tower was destroyed, including all the weapons, equipment, and currency from the first game. (However, players that reached Level 20 and finished the “Black Garden” mission will be able to preserve the look of their Guardian in the sequel. Likewise, accomplishing certain achievements in the first game will net more in-game rewards for starting the sequel.)

This sequel is set one year after the conclusion of Destiny’s final expansion, Rise of Iron, and it finds the Last City on Earth under attack. The Cabal, one of the enemy factions from the first game, and a new foe called Ghaul (not Gary) have raided the home of the Guardians. This offers an in-game explanation for players losing their gear and weapons between the two titles.

Destiny 2 will feature familiar faces as well as new heroes. Although we haven’t seen any yet, it has also been confirmed that players will be traveling to more worlds than just those offered in the first game.

Bungie showed off gameplay at a May 18 livestream event, revealing the shape Destiny 2 is taking.

Any players who preorder the game will get access to a beta later this year. The open test will be spread across all three platforms, and players who buy the game on digital or physical services will be granted an access code. More details are expected at Bungie’s upcoming event and at E3.