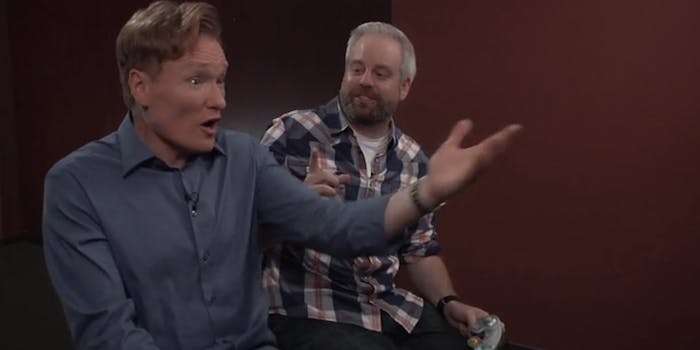 Conan O’Brien got a sneak peek at the new ‘Super Smash Bros.’

“So you’re King Kong, and I'm an anemic yoga instructor.”

Conan O’Brien’s latest “Clueless Gamer” segment is his most exciting yet, offering the unwashed masses a glimpse of Super Smash Bros. for the Wii U. The game is still so deep in development that it doesn’t have cover art yet—though Conan has Nintendo covered there.

The goofy mashup vibe of the franchise leaves the talk show host even more befuddled than usual, and by the end he’s just mashing the controller against his chest. Laugh along as he describes his bias against elves, rubs Mario’s nipples, and speculates on the origin of Kirby, all while navigating the hyperkinetic, slapstick violence that smashers know and love.

Between the sarcastic clapping and Luigi’s death stare in MarioKart 8, these characters sure seem to have more bite recently. Guess it’s just these tough times we live in.