Tumblr user Tica has created a blog dedicated to fixing the skimpy armor of warrior women in pop culture.

If you play video games, read comics, or generally pay attention to pop culture, you may have noticed that female warriors and heroes are often dressed quite differently from their male counterparts. From covering less to being molded to show off curves, armor and costumes for strong women seem bent on taking something away from their toughness.

If you’re worried about these portrayals and want to see them change, you’re not alone. Tumblr user Tica has created a blog dedicated to fixing the armor of warrior women in pop culture. The blog is called Repair Her Armor and according to the description “is dedicated to show and change the looks of ridiculous female armors (and other outfits) that women tend to have in media; such as games and comics.” 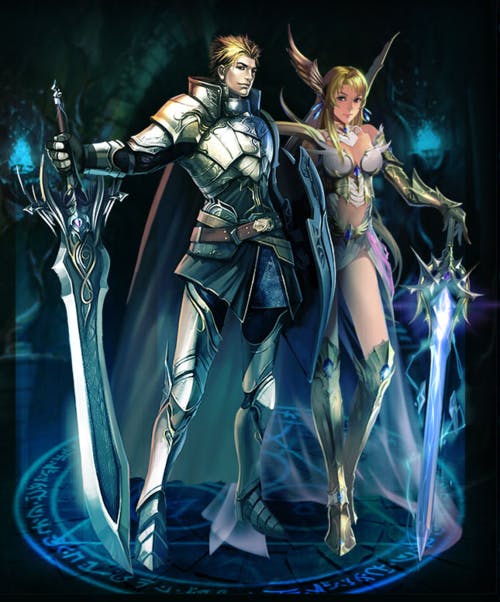 An example showing the difference between armor designed for men and women. “Just a slight difference,” Tica writes. “Slight.”


“The purpose is to show that over-sexualized women is not ‘empowering,’ but clearly offensive and ridiculous—not to mention it’s also clearly out of context,” Tica writes. “We’ll also show that their clothes could be greatly improved with a touch of common sense, equality and character.”

On the blog, Tica posts images of women wearing ridiculous armor and also shares how she would redesign the outfit. Her redesigns cover the often ludicrous amount of skin exposed and usually look better than the originals. 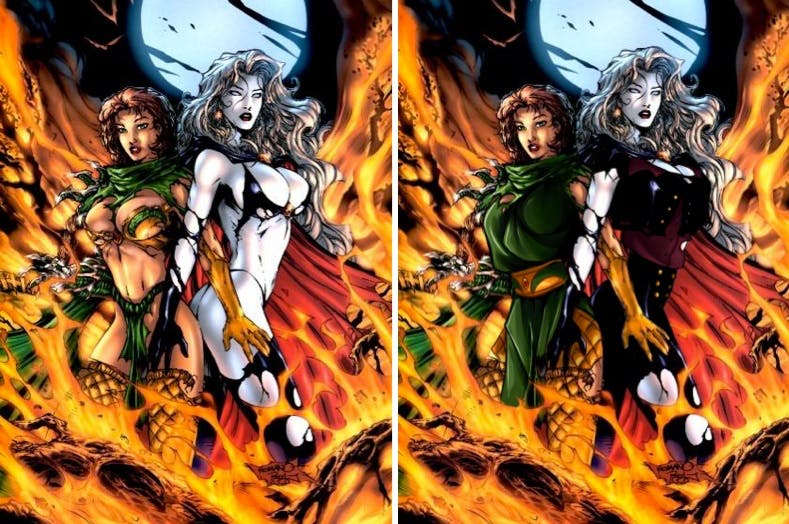 The original (left) next to Tica’s fixed version (right).


Tica started Repair Her Armor on April 1 and already has a growing following. She accepts submissions from her readers of images they find and think are in dire need of repair as well as good examples of armor and even shares her readers’ own redesigns. She also doesn’t mind being asked what armor she does like and often will share positive examples on the blog. 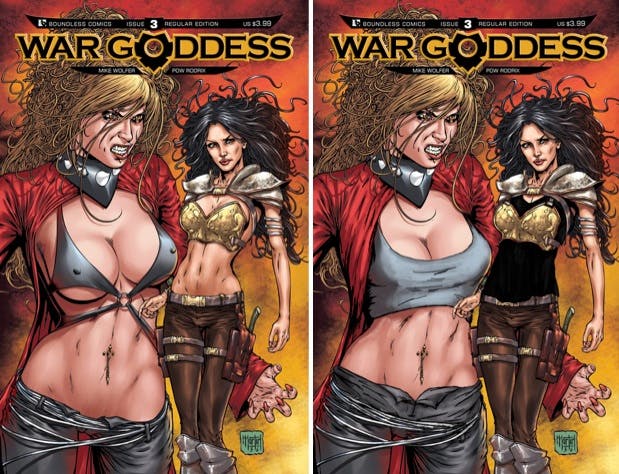 The original comic book cover (left) next to a fixed version (right) submitted to Repair Her Armor by Tumblr user northcentralpositronics. 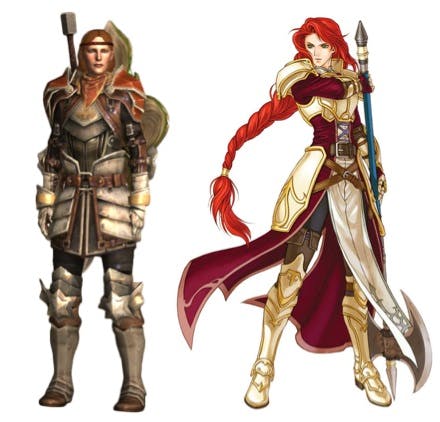 
Every day she posts at least two submissions from readers, and she says the submissions keep pouring in. Some of her contributors are even concept artists in the industry, showing how the very people who might be able to make a difference from the start are eyeing her work.

While many of the submissions and armor highlighted on the blog are from video games, she also points out ridiculous armor from other media and shares cartoons commenting on how prevalent the problem is. There are multiple posts showing the armor of men and women in the same media next to each other, where the problem becomes extremely clear. While the men wear full sets of armor, women often have their midriffs, legs, and top of their chests exposed. Even when women are covered up the designs that mold to women’s chests giving them curves are impractical. As a Tor.com article explored earlier in May, shapely armor (specifically the “boob plate”) would be a deadly design for warriors. 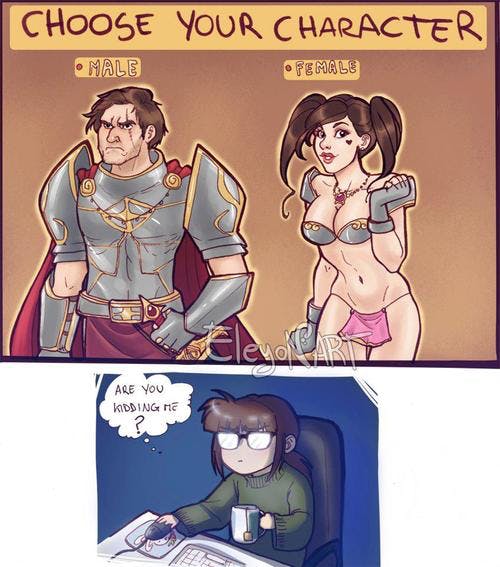 The stark distinction between the armor designed for women and men in media speaks to the larger sexist attitudes that still tinge these mediums. In gaming for example, Tica’s post titled “Clothes I’m forced to wear in the majority of MMORPGS” received a lot of attention in the online gaming community, even being shared on Kotaku. The commentary was more fun than serious on that post, but how it spread and was embraced by female gamers says a lot about the outfits available are far from what women want their characters to wear. Instead, they’re designed for what men, who many believe to be the primary and only customers of these products, would like to see.

The idea of these genres as male exclusive spaces is not new. Sexism pervades many areas of media, including science fiction, gaming, comics, and even the merchandise created for consumers. 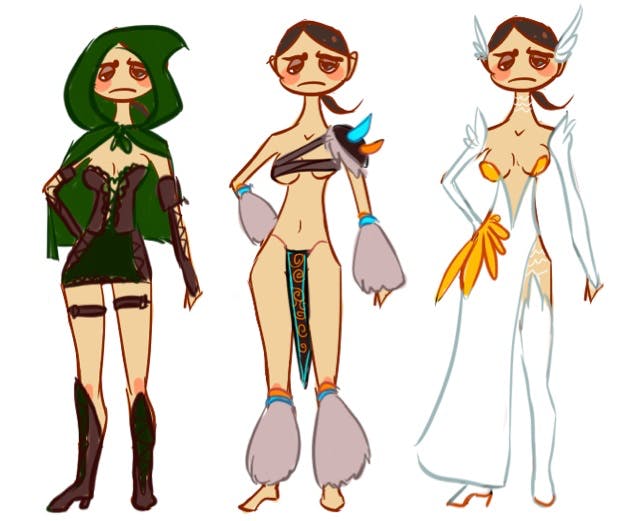 Outfits from Tica’s “Clothes I’m forced to wear in the majority of MMORPGS” post include the Everyday Archer (left), the Stereotype Shaman or Barbarian (center), the Creative Healer (right), and more.


Even commenting on the disparities between representations of women and men in these mediums is enough to bring out the parts of the male audience who want these spaces to remain purely for them. On Tuesday, it didn’t take long for critics of vlogger Anita Sarkeesian to get her second video in her Tropes vs. Women in Video Games series removed for a time.

Tica is no stranger to those who think her cause itself is a ridiculous one. From comments as short as “You sure like to complain, huh?” to longer trolling comments like one from last week, by a man who proclaimed he only visited the blog for the “before” shots because “a half-naked chick in a video game is a plus” and he hoped his comment made her red in the face. Tica’s responses often end up making the commenters look even more absurd. 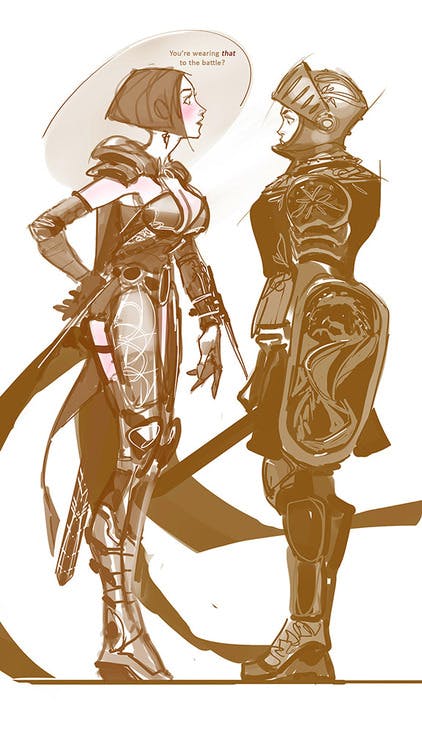 She’s not alone in addressing these issues on Tumblr. She affiliates with two other blogs dealing with similar issues: Bikini Armor Battle Damage, which pokes “fun at risks of being a half-naked strong warrior woman,” and Escher Girls, a blog dedicated to archiving and showcasing “the prevalence of certain ways women are depicted in illustrated pop media, specifically how women are posed, drawn, distorted, and sexualized out of context, often in ridiculous, impossible, or disturbing ways that sacrifice storytelling.”

If the growing number of Tumblrs about this issue (and Repair Her Armor’s growing audience) is any indication, this is another area in the media that both women and men think need to be addressed and made fairer for both sexes. Warrior women are supposed to be as strong and capable as their male counterparts, so why do they get the sexualized treatment? As Tica writes in an April post, the problem lies in that these depictions don’t treat the woman portrayed as actual characters, but just sex objects. 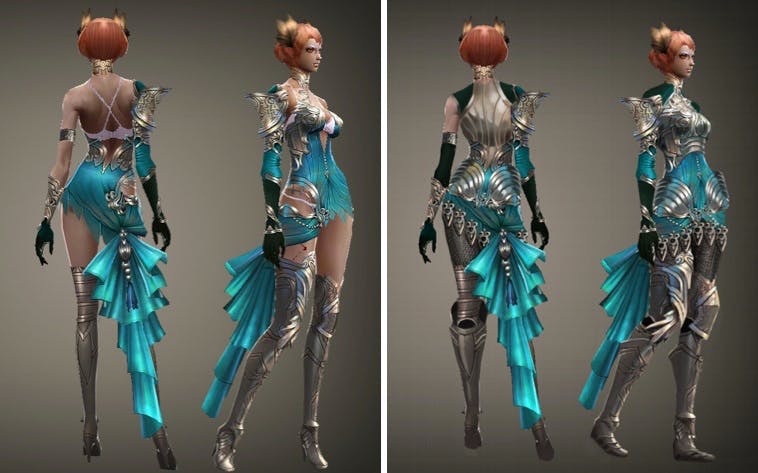 
“The only thing they seem to focus on is their ‘sexy parts’ instead of focusing on their actual designs. It’s very disrespectful not only to women but for any viewer,” Tica writes. “It’s like saying, ‘Hey, LOOK. BOOBS. BUTT. You wouldn’t care about this girl/game unless she had some, right?’ They’re basically fap objects. They don’t want us to think about their backstory, personality, and whatnot. Just the sexy parts.”

Images via Repair Her Armor/Tumblr