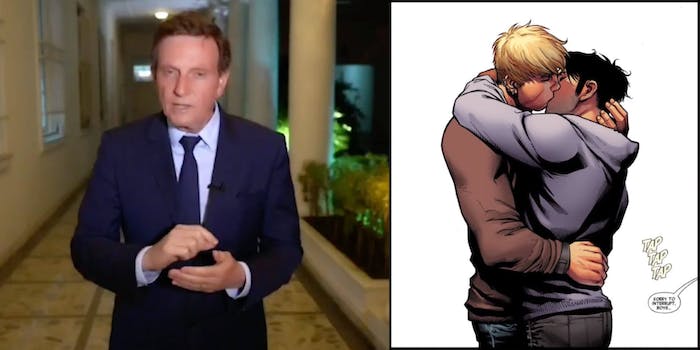 The copies sold out instead.

The Mayor of Rio de Janeiro in Brazil, Marcelo Crivella, attempted to block an Avengers comic from being sold at the Rio International Book Biennial, after discovering that two gay characters share a kiss within its pages. The Brazilian politician claimed his efforts were justified as the comic contained “content that is unsuitable for minors,” according to the Independent.

Crivella’s comments came in response to a scene from 2010’s Avengers: The Children’s Crusade. In the comic, the teenaged Billy Kaplan—otherwise known as Wiccan—shares a kiss with his boyfriend Teddy Altman, a.k.a. Hulkling. The same comic received criticism from another Brazilian politician, Alexandre Isquierdo. The councilman claimed the comic would “spread homosexuality to children” in a recent Instagram post.

A post shared by Alexandre Isquierdo (@alexandreisquierdo) on Sep 4, 2019 at 5:47pm PDT

Crivella, who was elected as mayor of Rio de Janeiro in 2016, used to be an evangelical bishop. In a video posted to Twitter, he explained his reasoning in Portuguese. In the video, Crivella claimed the book should be removed to “protect our children,” per translations from the Independent. He also said that children should not “have early access to subjects that do not agree with their ages.” Previously, Crivella has referred to homosexual people as “victims of a terrible evil.”

Crivella said his decision was to “comply with the law and defend the family.” He noted that he feels a warning should be placed on the packaging for comics, which should be individually sealed. The mayor ordered officials to seize copies of the book from the festival.

It is not everyday that comics make the front page of the largest newspaper in Brazil. The reason? Rio de Janeiro's (evangelical bishop turned politician) mayor requested that the largest book fair in the country recall an Avengers comic book because of a gay kiss in it. pic.twitter.com/QKQAiyVlrm

Unfortunately for Crivella, his efforts were unsuccessful. Not only did festival organizers refuse to comply with his orders, but local reporting revealed that the attempt was unnecessary. According to Brazil’s O Globo, eight of the nine stalls present did not offer the comic in the first place. The ninth, which previously had copies, sold out of Avengers: The Children’s Crusade before Crivella issued his order.

The event’s organizers appeared to disagree with Crivella’s stance. They said the event “gives a voice to all audiences, without distinction, as a democracy should be,” according to O Globo.

And a Brazilian YouTuber, named Felipe Neto, said in a vlog that he would be buying 14,000 LGBTQIA+ books and handing them out at the event. A “warning label” will be featured on the books, reading, “inappropriate for outdated, backward, prejudiced people.”