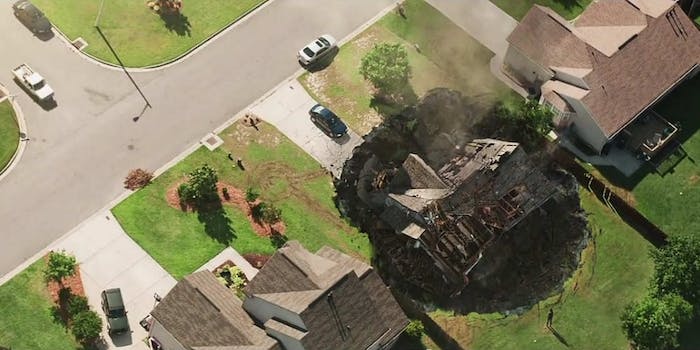 There's nothing like combining awkward teens and supernatural powers.

There are plenty of books and movies about awkward youths suddenly displaying magical or supernatural powers. Now BioWare and Electronic Arts are bringing that experience to video games.

On July 25, BioWare released the first teaser under the tag line “You’ve been chosen” for a new game that will likely be called Shadow Realms. BioWare has since released two additional teaser videos, with the latest one hitting the Web on Wednesday.

In the “Impact” teaser, a girl repeats “It’s not my fault” as the camera pans over a suburban home that’s fallen into a pit ringed with fire.

In the previous teaser, “Spark,” a boy gets angry at his smartphone and blows it up with a lightning bolt. He really, really didn’t want to take that call.

And in the original teaser we had previously shared with you, “Nightmare,” a different boy gets caught in an infinity mirror-type alley, sees himself inside a locked car, and then starts glowing under his hoodie before waking up in terror.

There’s a Tomorrow People vibe going here. It’s also reminiscent of young mutants waiting for Professor Xavier to come pick them up and bring them to his School for Gifted Youngsters, or young wizards waiting for their invitations to Hogwarts School of Witchcraft and Wizardry.

And circles. Everyone seems to love circles. Circles of fire, circles on napkins, circular-shaped pits into which houses are sunk, you name it. Circles.

According to a note at the bottom of the “Impact” teaser, BioWare is holding a fan event in Cologne, Germany, on Aug. 13. Gamescom, which is more or less the European E3, also begins the same day.

That means that a week from now we’re probably going to know the confirmed title of the game, and hopefully will find out what the heck all the circles are about.