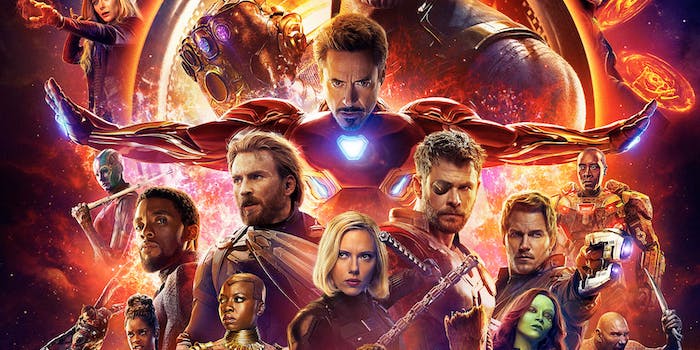 It could break the records set by 'Black Panther.'

According to Box Office Mojo, Black Panther is now the third highest grossing movie in American history. The first Avengers movie clocks in at number six, with Age of Ultron at 14. The Avengers ranks higher in terms of worldwide grosses, making it the fifth highest grossing movie ever, period. Could Infinity War break those records?

At the moment, Infinity War is tracking to open with a $200 million weekend in the U.S., something that only happens with the top tier of heavily hyped blockbusters. Apparently Marvel’s strategy is working: Bring together the cast of every single sub-franchise, and their audiences will come too.

The big question now is how long Infinity War will last at the top of the charts. Black Panther opened big, but it also proved to have a long lifespan. Word of mouth and glowing reviews kept it alive even longer than expected, making it America’s number one movie for weeks on end. We know millions of people will see Infinity War on opening night, and hardcore Marvel fans will rewatch it no matter what, but Infinity War‘s staying-power will rely on it actually being good.