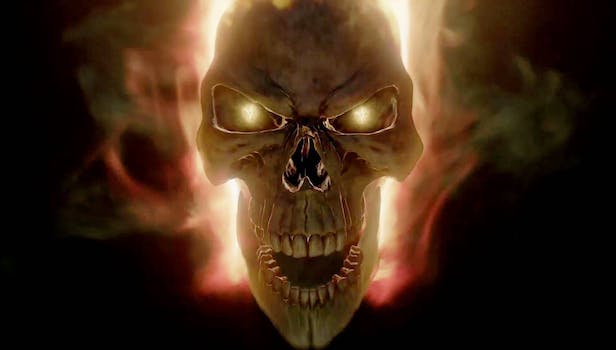 Photo via The Flash 4k/YouTube

'Agents of S.H.I.E.L.D.' returns next week with a supernatural new tone.

Agents of S.H.I.E.L.D.‘s fourth season is making an abrupt turn by introducing Ghost Rider Robbie Reyes, an undead car mechanic with a flaming skull for a head. Kind of a new situation for a show that previously felt like a mashup between NCIS and the X-Men.

Marvel shared its first photos of Gabriel Luna as Robbie Reyes a couple of weeks ago, including one image with the full flame-skull head. Now we get to see him in action in the season’s first trailers, plus plenty of action from Reyes’ fiery demon car.

The latest trailer sets a new tone for Agents of S.H.I.E.L.D., with Daisy facing up to Ghost Rider’s vigilante vengeance.

Marvel's #AgentsofSHIELD returns with a vengeance this Tuesday at a NEW TIME 10|9c on ABC. https://t.co/TIuBq2FXYp

It looks like the show is taking Ghost Rider’s supernatural status at face value, but we can’t help but wonder if they’ll try to give him a scientific explanation, or possibly recast Robbie Reyes as an Inhuman. We hope not, because it’s probably better to leave a flaming skull dude unexplained.