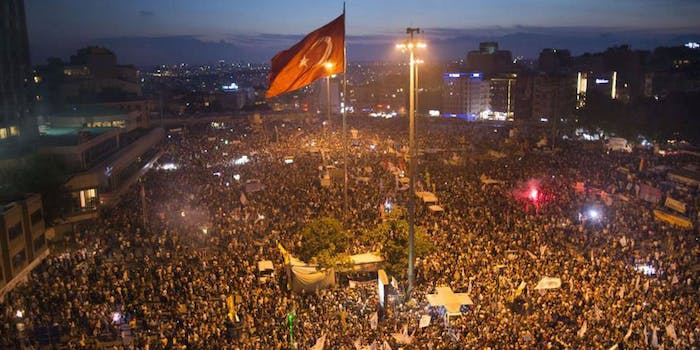 The lesson of Gezi Park, apparently, was just to out-Twitter activists.

If you’re Turkey, you start playing that game yourself.

The country’s ruling Justice and Development (AKP) party has announced plans to develop a 6,000-member team devoted to shaping public opinion through social media, the Wall Street Journal has reported.

A senior party official quoted in the Journal described the project as “aim[ed] at developing a positive political language which we are teaching to our volunteers,” and that “when the opposing camp spreads disinformation about the party, we correct them with valid information, always using positive language.”

A handful of other countries, namely China and Vietnam, officially employ similar propaganda tactics. Both those countries are ranked far more harshly on Reporters Without Borders’ “Enemies of the Internet” index.

In May and June, the AKP received resounding international criticism for its violent crackdown of a popular uprising surrounding the government’s attempt to replace Istanbul’s Gezi Park. The party apparently was caught completely off guard with how protesters can organize through Twitter, especially as Turkey’s traditional media barely mentioned the protests.

At the time, Turkey arrested at least 29 people were for tweeting “misleading information” or “propaganda.” The head of AKP, Recep Tayyip Erdo?an, has yet to tweet the Turkish word for irony.