Why you should never mess with Anderson Cooper on Twitter

When a Twitter user accused Cooper of being biased, the reporter dug into her Twitter history to craft an epic comeback.

The host of CNN’s Anderson Cooper 360 is in Gaza this week as the conflict between Israel and groups based in Gaza continues. On Monday evening, he reported that four rockets were fired from a location close to a Gaza City media center, which was hit by Israeli missiles the same day.

Twitter user Pamela Weiss took exception to Cooper’s tweet on the matter, urging him to report “facts” and a “fair story” by mentioning rockets fired from Gaza instead of just the attacks coming from Israel. Of course, Cooper had been doing so on CNN and Twitter all day, including in the tweet that Weiss was replying to.

Cooper’s response was epic, as he did some reporting on Weiss’s own life in his comeback: 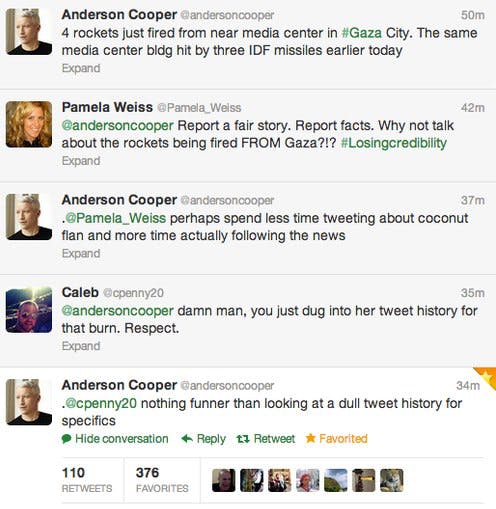 Weiss, who admits to loving Israel, apparently deleted her original tweet to Cooper, but claimed in a follow-up tweet that Cooper was just jealous she didn’t save him a slice of that flan. Not quite the incisive critique of Cooper’s burn we were hoping for, but we’ll take it.

Cooper’s “flan” quip has been retweeted and favorited over 2,700 times.

Photo via CNN/YouTube; Screenshot via Imgur