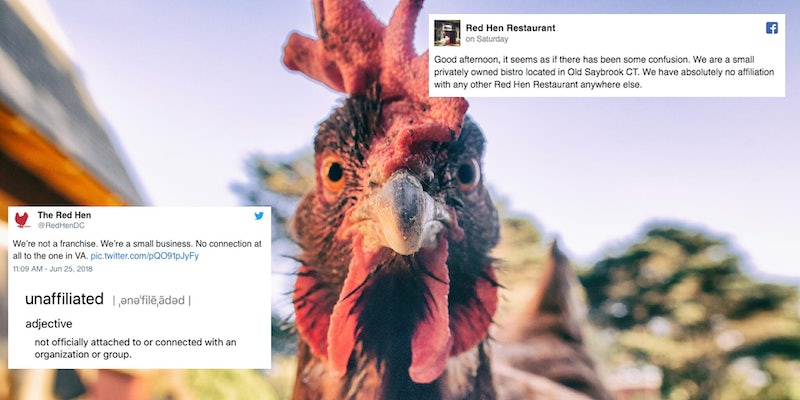 Sanders tweeted Friday that the owner of Virginia’s Red Hen asked her to leave because of her role in President Donald Trump’s administration. The incident prompted rallying cries from right-wing lawmakers and provoked anger from conservatives on social media.

But as the Daily Beast reports, other restaurants named Red Hen now find themselves defending against harassment and vandalism even though they’re not affiliated with the Virginia eatery.

The Red Hen in Washington, D.C., is enduring the worst of the vitriol. Despite tirelessly explaining (via GIFs and sarcasm) that its restaurant is not connected to the place that booted Sanders, pro-Trumpers continue sending angry calls, emails, Yelp reviews, social media comments, and even death threats. Vandals egged the restaurant over the weekend.

We’re not a franchise. We’re a small business. No connection at all to the one in VA. pic.twitter.com/pQO91pJyFy

It’s almost like all of our logos are of the same animal we’re named after or something. pic.twitter.com/iFc33FQkGj

To little avail, the D.C. Red Hen has explained that because of its location, it legally can’t refuse service because of someone’s political views.

Businesses in DC are prohibited from discriminating against people for political affiliation because we are a federal district. We have patrons from both sides of the aisle. https://t.co/IOmNmYqoj5 pic.twitter.com/xfkff7t4B0

Meanwhile, the Red Hen Restaurant in Saybrook, Connecticut, changed its voicemail and posted on Facebook to deter an influx of “threatening messages,” WTNH reports. The restaurant explained it has “no affiliation with any other Red Hen Restaurant anywhere else.”

A Red Hen in Swedesboro, New Jersey, is facing similar problems. Its Facebook now states in all-caps that it “IS IN NO WAY AFFILIATED WITH THE RED HEN IN VIRGINIA,” and the owner said the phone’s been ringing off the hook with “swearing, cursing, vile things.”

Yelp has stepped in to “clean up” reviews “motivated more by the news coverage itself than the reviewer’s personal consumer experience with the business” for both the Connecticut and New Jersey restaurants, the Daily Beast reports.