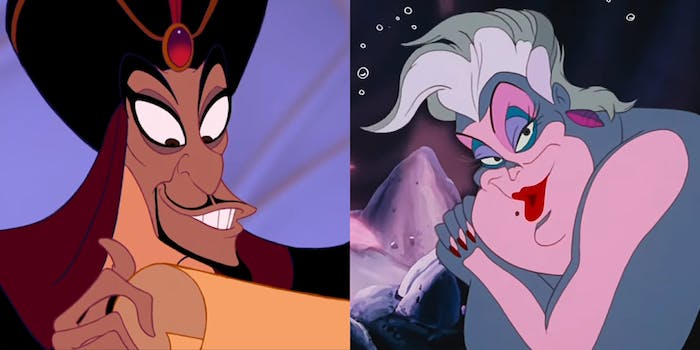 Why must 'fat woman' equate to 'bad woman' in Disney's eyes?

I’ll admit that it was the trending hashtag on Twitter that first caught my eye: #HotJafar

Jafar? Who was that and why was he hot, I wondered?

“I’m trying to figure out how people are supposed to root for Aladdin and learn lessons when Jafar is out here looking like a whole 4-course meal.”

Oh, that Jafar. The villain in Disney’s upcoming live-action remake of Aladdin, coming to a theater screen near you in this Friday. We got our first glimpse of his chiseled, handsome face last December when the film’s first-look photos were released, and it was clear that this was definitely not the classic Disney villain so many of us came to know in the original 1994 cartoon.

Now, Jafar’s “got people seeing a whole new world,” according to BuzzFeed. Jafar, or the actor Marwan Kenzari, is indeed quite handsome; that much is obvious. But amidst all that internet fanfare and racing heartbeats, something else has become even more obvious pretty quickly. The more I thought about it, the more I began to see a subtext in all this unbridled villain worship.

Jafar is allowed to be hot, but Ursula never likely will be.

In the original Aladdin, Jafar is far from conventionally attractive; he’s slimy and sleazy. But now that he looks like he’s just stepped off the set of a Calvin Klein commercial, people are “rooting for Jafar.” Ursula, on the other hand, remains a cautionary tale. Fat is bad. Fat can’t be beautiful. Fat can’t be sexy. Don’t let this happen to you, you poor unfortunate female soul. Would Disney trust the American public to think Ursula was bad if she wasn’t fat? Doubt it.

To be sure, the only female villain who seemed to escape the traditional “hag” label was the most recent retelling of Sleeping Beauty starring Angelina Jolie as evil queen Maleficent. She’s traditionally hot, complete with sharp cheekbones that only accentuate a feature that we are told is modelesque. However, the last time I checked, the character wasn’t met with the same thirst or a dedicated hashtag like Jafar.

As for The Little Mermaid, production for the live-action feature film kicks off next year, but if the recent Hollywood Bowl concert is any indication, we shouldn’t expect human Ursula to deviate very much from her cartoon incarnation. Just last week, a star-studded cast gathered to celebrate the film’s 30th anniversary, with actor Harvey Fierstein as Ursula, so it doesn’t look like producers had any desire to “hot up” Ursula in the same way Aladdin is doing with Jafar.

In other words, gender stereotypes are still alive and well in the wonderful world of Disney. These messages are telling young audiences, especially young girls, that “ugly” means evil. That as long as you’re hot, then it doesn’t matter if you do bad things.

If Disney’s motives for its makeovers are really just to “update” its live-action films, a good place to start would be with the heroines instead of focusing so much on the villains. We’re in an age where there’s a real need for inclusion and representation of all body types, so to see that reflected in characters like Belle or Snow White would be powerful. For the first time, young girls could actually see princesses and heroines that look like them, and they could celebrate that, instead of feeling like their favorite characters are victims of unattainable beauty and body standards that no one could ever live up to.

But while we wait for that to happen, I hope that we can give fat Ursula the same love we’re giving hot Jafar. Jafar, with his washboard abs and intense stare, makes us forget, or at least forgive that he is bad. I’m not asking that we erase from our collective memory Ursula’s horrible behavior, but let’s just keep our contempt to her manipulation of Ariel, not to her body because it demands space.