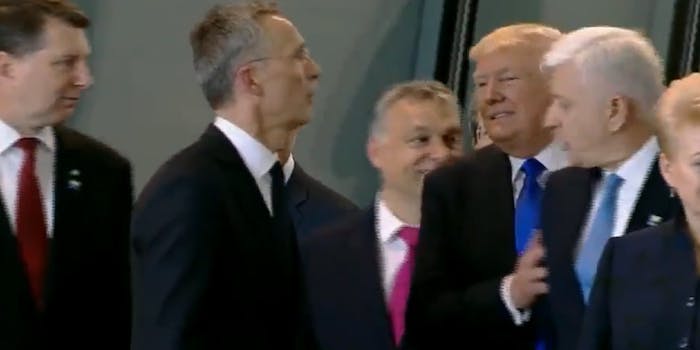 Trump shoves NATO leader to be in the front of group

This is the second embarrassing mishap for Trump on Thursday.

Everyone knows President Donald Trump strives to be a strong leader—but literally shoving another world leader to get to the front of a group is something new.

It appears that Trump, while meeting with other NATO leaders during his first foreign trip on Thursday, shoved someone out of the way so he could be front and center.

After pushing past the leader—identified as Dusko Markovic, prime minister of Montenegro—he adjusts his suit jacket and poses.

Take a look at it here and decide for yourself.

Did Trump just shove another NATO leader to be in the front of the group? pic.twitter.com/bL1r2auELd

In case you (somehow) missed it, here is the shove in slow-mo:

Slo-mo: Trump appears to push aside/shove another NATO leader to get to the front of the group. pic.twitter.com/K0OC6QnEL4

Naturally, the internet had a field day with Trump’s latest attempt to be seen and heard.

He wouldn't do that to Gianforte, I can tell you that.

The face he makes after shoving himself to the front of the line says it all.

Trump has repeatedly accused members of NATO of owing the United States money for defense.

This is the second embarrassing mishap for Trump on Thursday; earlier in the day, newly-elected French President Emmanuel Macron bested Trump at his own handshake power grab.