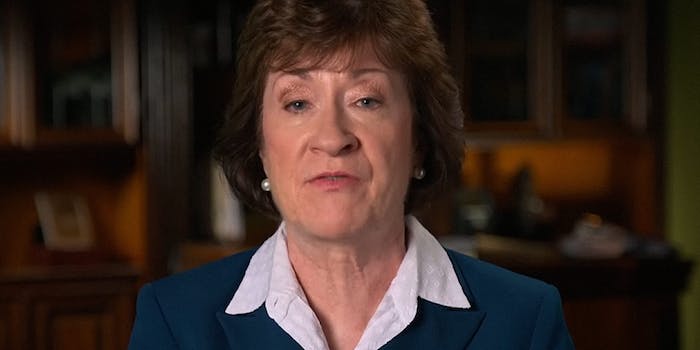 Screengrab via Face The Nation/YouTube

The hot mic has struck again, this time capturing shots taken at a Texas congressman who blamed female senators for the Senate’s perceived inability to repeal and replace Obamacare.

At the end of a meeting for the U.S. Senate Committee on Appropriations, Sen. Susan Collins (R-Maine) and Sen. Jack Reed (D-Rhode Island) were recorded dissing Republican Texas Rep. Blake Farenthold, calling him “unattractive,” and stating Collins would win in a duel between her and Farenthold.

The week prior, Farenthold stated in a radio interview that “female senators from the Northeast” stood in the way of repealing and replacing Obamacare by opposing the Senate’s proposed healthcare bill. Farenthold also stated that if the senators were men, he would challenge them to a pistol duel.

MALE SENATOR on FARENTHOLD: "You could beat the shit out of him."

At the end of the appropriations meeting, which was recorded and uploaded to the Senate website but later taken down, Collins is picked up by a live microphone asking Reed about Farenthold, “Did you see the one who challenged me to a duel?”

“I know. Trust me, do you know why he challenged you to a duel? ‘Cause you could beat the shit out of him first,” Reed replied.

The pair is heard laughing before Collins is heard calling Farenthold “fat,” “huge,” and, “he is so, I don’t mean to be unkind, but he’s so unattractive, it’s unbelievable.”

Collins proceeds to reference a photo of Farenthold in pajamas while posed next to a scantily-clothed model taken in 2010, saying, “Did you see the picture of him in his pajamas next to this Playboy bunny?”

This is the photo Sen. Susan Collins was referring to when she commented on Rep. Blake Farenthold wearing pajamas in 2010. pic.twitter.com/jZYCPC4FYW

That’s when someone steps in and informs the pair that they’ve “got a hot mic,” and the line is immediately taken offline.

Prior to the insults directed at Farenthold, Collins and Reed expressed concerns regarding Trump’s handling of the national budget, according to the Washington Post.

“I swear, [the Office of Management and Budget] just went through and whenever there was ‘grant,’ they just X it out. With no measurement, no thinking about it, no metrics, no nothing. It’s just incredibly irresponsible,” Collins is heard saying.

“Yes. I think—I think he’s crazy,” Reed said, referring to Trump. “I mean, I don’t say that lightly and as a kind of a goofy guy.”

“I don’t think he knows there is a [Budget Control Act] or anything,” Collins says moments later, with Reed responding with an assertion that Trump’s proposed budget “would cause chaos.”

“We’re going to be back in September, and, you know, you’re going to have crazy people in the House,” Reed says.