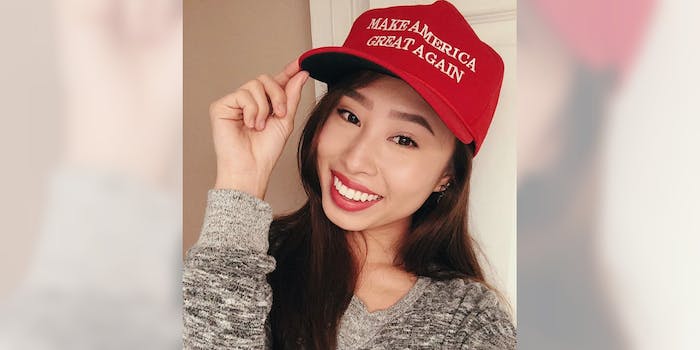 The former Miss Michigan was dethroned over racist and Islamophobic tweets.

Kathy Zhu, the former Miss Michigan who was dethroned over racist and Islamophobic tweets, is joining President Donald Trump’s 2020 presidential campaign, specifically his ‘Women For Trump’ Coalition Advisory Board.

In early July, Miss World America was made aware of Zhu’s “offensive, insensitive, and inappropriate” social media behavior and swiftly stripped her of the “Miss Michigan” title.

“Did you know the majority of black deaths are caused by other blacks? Fix problems within your own community before blaming others,” she reportedly once tweeted in response to another user.

A student organization at Zhu’s former university asked her if she wanted to try on a hijab in celebration of World Hijab Day in 2018.

“There is a ‘try a hijab on’ booth at my college campus. So you’re telling me that it’s now just a fashion accessory and not a religious thing? Or are you just trying to get women used to being oppressed under Islam?” she tweeted.

Zhu has since stood by her remarks and criticized Miss World America for “discriminating against people with different opinions.”

Then, on Thursday, Zhu announced that she was joining the “Women For Trump” Coalition Advisory Board.

On Friday, Trump also shared the announcement made by Women For Trump on Facebook.

“She is a patriot who has continued to stand for American values despite being stripped of her crown,” the post reads.