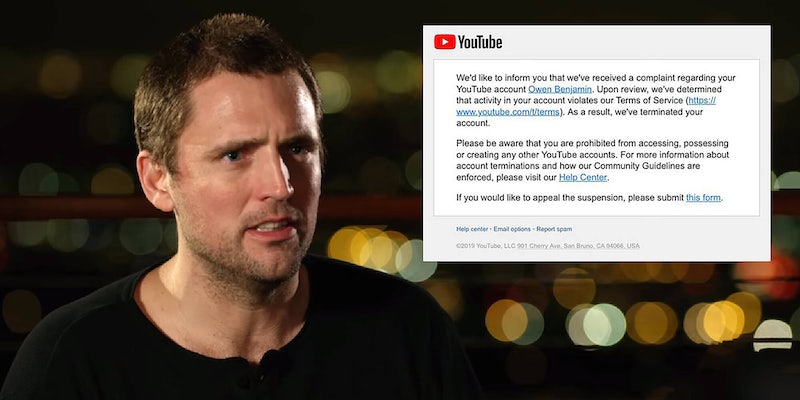 Owen Benjamin's channel was taken down.

Owen Benjamin was banned by YouTube last night, triggering a wave of right-wing pundits theorizing about a new “purge” of channels on the platform.

Benjamin, who refers to himself as “Big Bear,” is part of the “alt-right,” a right-wing affiliation known to harbor white supremacists. He has appeared alongside right-wing pundits likes of Steven Crowder and also been on live streams on VDARE, a white nationalist site.

He also posted a video comparing his YouTube ban to being kicked out of a gay bar. “I take it as a badge of honor,” he said, conceding that the YouTube ban “stung” a little.

The alt-right comedian then directed his fans to Unauthorized.tv and DLive, both alternative platforms to YouTube, with less strict community guidelines.

His channel now reads, “This account has been terminated for a violation of YouTube’s Terms of Service.”

The ban comes a day after YouTube CEO Susan Wojcicki sat down with 60 Minutes to discuss what the platform is doing to limit hate on the site, while also balancing a need for free expression.

Bitchute, a video platform that has begun to serve as an alternative YouTube and a home for neo-Nazis, tweeted that they believe a massive purge is underway: “Is Wojcicki preparing the world for a massive #YouTubePurge this December?”

Is Wojcicki preparing the world for a massive #YouTubePurge this December? https://t.co/5sgYXnJMf4

OWEN Benjamin’s YouTube channels have been banned in the beginning of what is expected to be another mass purge of YouTube.

Owen Benjamin did a video on Youtube calling me a cunt and a Jewish shill as well as other expletives. Obviously it's his right to do so, but it's also my right to NOT defend him. And I'm NOT!

However, we should all be concerned about the social media censorship campaign!

Benjamin is not one who is afraid to espouse and float conspiracy theories and racist hatemongering. He once argued that the Ku Klux Klan is not as “offensive” compared to liberal policies.

“The Ku Klux Klan never killed babies. They hung, like, eight dudes… They may string up some guys. They’ve done it. It’s been like 50 years—big fucking deal. We get over things in this country. Then they started adopting highways and having barbeques. Murdering babies is way worse!” Benjamin stated, according to a Right Wing Watch report.

Back in 2018, Benjamin told his Facebook followers a ban might be coming soon. YouTube at that point, issued him a warning, also known as a “strike.”

Update 1:53pm CT, Dec. 4: According to a YouTube spokesperson who spoke with the Daily Dot via email, Benjamin was banned from the platform for working to circumvent YouTube’s Terms of Service.

Benjamin, who had both a strike against his account and his live streaming privileges temporarily suspended, tried to dodge enforcement by live streaming on other channels. YouTube told the Daily Dot they took action against the account that is consistent with action taken against other channels that make similar violations.