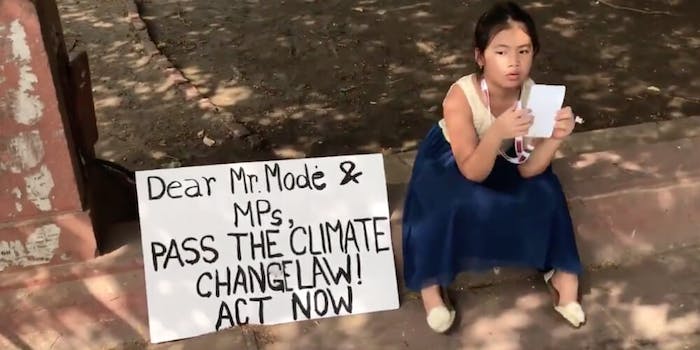 'I began my movement since July 2018 even before Greta was started.'

Licypriya Kangujam, an 8-year-old Indian climate activist, says her Twitter account was suspended–and restored a few hours later–after she complained about being compared to Greta Thunberg.

“Twitter shouldn’t attempt to silence the voice of young climate activist in any part of the world in future,” Licypriya told WION after her account was restored.

Kangujam was suspended after she penned a series of tweets earlier this week about how the Thunberg comparisons are problematic.

“I began my movement since July 2018 even before Greta was started,” she wrote at the time. “I sacrificed so much of my life in this tender age is not to called me ‘Greta of India.”

Dear Media,
Stop calling me “Greta of India”. I am not doing my activism to looks like Greta Thunberg. Yes, she is one of our Inspiration & great influencer. We have common goal but I have my own identity, story. I began my movement since July 2018 even before Greta was started. pic.twitter.com/3UEqCVWYM8

I even dropped out my school since February 2019 (before Grade 1 final exam) when I was just 7 years old due to my protests every week in front of the Parliament House of India. I sacrificed so much of my life in this tender age is not to called me “Greta of India”.

After the suspension was lifted, Kangujam said her posts weren’t abusive nor “against anyone.”

She also doubts that her age was a factor behind her suspension.