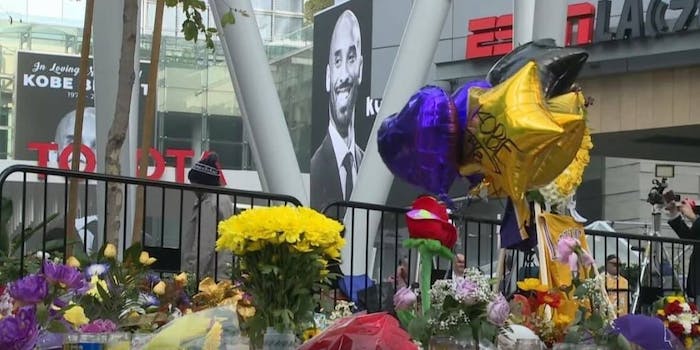 More than a million people have watched.

Multiple YouTube videos purporting to show the helicopter crash that killed NBA legend Kobe Bryant, his daughter, and seven other people on Sunday popped up on the platform in the immediate aftermath of the accident.

As conspiracy theorists have already taken advantage of the tragedy and teens are mocking the accident on TikTok, at least two videos on YouTube claimed that it had footage of the crash that occurred in a Los Angeles suburb.

If you type “Kobe Bryant crash” or “Kobe Bryant helicopter” into YouTube’s search bar currently, you’ll find legitimate news stories on the accident along with video of the aftermath and audio taken of the communication between air traffic control and Bryant’s helicopter pilot.

But according to CNet, there were multiple videos that claimed to show Bryant’s helicopter crash that actually showed a different accident.

One was called “Video Footage Helicopter crash of Kobe bryant with her daughter” (yes, Bryant, in this case, was referred to as “her”), and after it was uploaded to the site on Sunday, it garnered more than 1.4 million views, CNet wrote. Another video posted Sunday compelled more than 325,000 people to watch.

The first video did not allow comments to be written, but on the second video, one commenter wrote, “Come on people…THIS ISN’T THE SAME. Look at the terrain…California hills don’t look like that. And fog was out according to the weather.”

Snopes.com also said a video supposedly about Bryant was miscaptioned. Snopes wrote that on Sunday, a video titled “Kobe Bryant Helicopter Crash LIVE FOOTAGE!” was posted that hundreds of thousands of people clicked. But the video actually showed a crash from December 2018 that occurred in the United Arab Emirates that killed four people.

None of those videos can currently be found via the YouTube search bar.

YouTube did not immediately respond to a Daily Dot request for comment about whether the site took down the videos and, if so, how many were deleted.