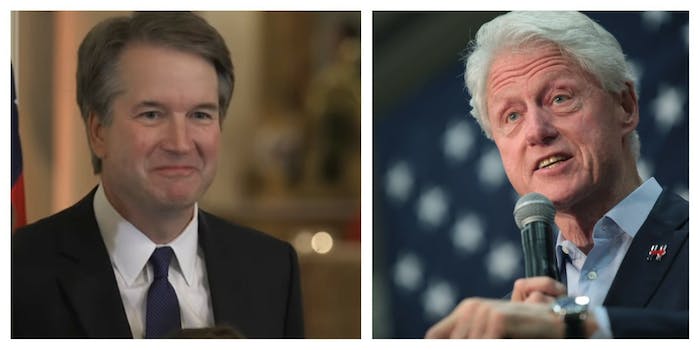 One of the top concerns from conservatives over President Donald Trump picking Brett Kavanaugh for the Supreme Court is that his long-time service in government has left a lengthy paper trail, which Democrats could both exploit and use to delay the nomination. But there’s one group of conservatives you won’t find complaining about it.

The denizens of r/The_Donald, the raucous (and racist) online forum for Trump’s most ardent supporters, are having a blast with it. Especially one particular part: Kavanaugh’s questioning of Bill Clinton.

Kavanaugh was Kenneth Starr’s lead deputy when Starr investigated President Clinton for misconduct, and he led the questioning of Clinton about his affair with Monica Lewinsky while in office.

If anyone remembers, it got graphic. And as revealed in the book, The Death of American Virtue, it was Kavanaugh who wanted to get dirty.

And now, r/The_Donald is relishing in its greatest hits.

Yeah, that’ll be a U.S. Supreme Court justice who wrote about a president’s ass-eating proclivities. (Reddit fans incorrectly mentioned footnote 220. They meant footnote 209 in the Starr report.) While it’s not clear that Kavanaugh specifically wrote it, it says that in her deposition Lewinsky noted her and the president “engaged in oral-anal contact as well.”

It’s also not clear who was doing which.

And, uh, the location of his ejaculation.

It wasn’t just Kavanaugh’s grilling of Clinton they enjoyed. After Kavanaugh’s nomination was announced, a story floated that he once referred to First Lady Hillary Clinton as a “bitch.”

They loved that as well.

While his past questioning probably won’t factor into the Senate’s decision on Kavanaugh, it only serves to bolster him in conservative eyes. Because if this isn’t “owning the libs,” what is?