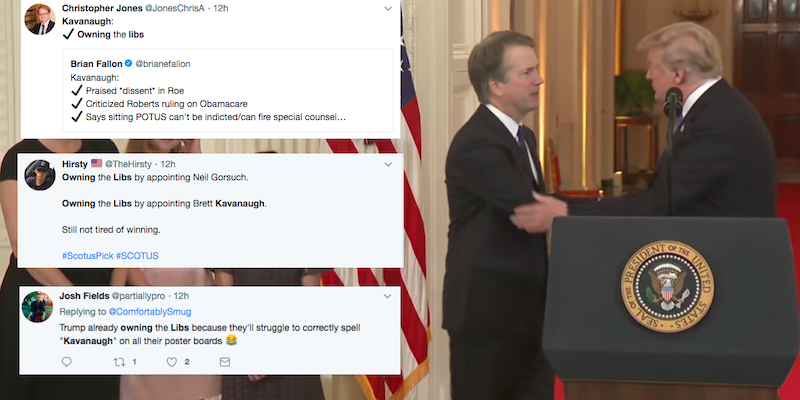 Brett Kavanaugh has the only conservative criteria that matters

Forget his anti-abortion stance; he has 'owned the libs.'

Last night, President Donald Trump nominated Brett Kavanaugh as his choice for the Supreme Court. And what do you think leading conservatives were touting online as news of the pick broke?

Was it his narrow interpretations of Roe v. Wade, showing he might be the deciding vote to overturn the ruling that most infuriates the right? His wide reading of Heller v. D.C. that firmly entrenches the right to own semi-automatic weapons in America?

Ha ha ha hell no. This is conservatism in 2018. There is only one overarching, abiding principle, and that is “owning the libs.”

That’s right, Brett Kavanaugh is the right pick for Supreme Court because half of America dislikes what he stands for. That’s pretty much the only cogent case conservatives could make last night.

I can't stop it from overflowing! WHAT DO I DO?! pic.twitter.com/iKjU8V5Vef

To answer the number one question I'm sure most of you had: yes, Kavanaugh has a history of owning the libs pic.twitter.com/Bf1YoGF26y

The thing is, though, happy as they are for Kavanaugh, who is as conservative as they come, this isn’t really some profound stance. Anyone Trump nominated—save for maybe Thomas Hardiman—would have “owned the libs.”

A conservative president nominating a conservative justice isn’t an earth-shattering surprise. It’s… a thing that was expected to happen that happened.

But while conservatives relish in the libs being owned, it’s a situation they wouldn’t be able to handle in reverse.

Imagine the fits of apoplectic rage if Democrats—with majorities in both Houses—tried to push Obamacare through Congress on the overarching basis that it would piss off conservatives, as opposed to arguing that it expanded access to healthcare to thousands of American people.

Like or dislike the policy, at least it had an identity behind it that simply isn’t trying to upset the other party.

But that’s not where the vast majority of conservatives in 2018 right now are. With their obsequious devotion to Trump—whose two guiding tenets are angrily undoing anything Barack Obama did and trolling—the main driving force in conservatism right now is echoing the vitriol that comes out of their leader’s mouth.