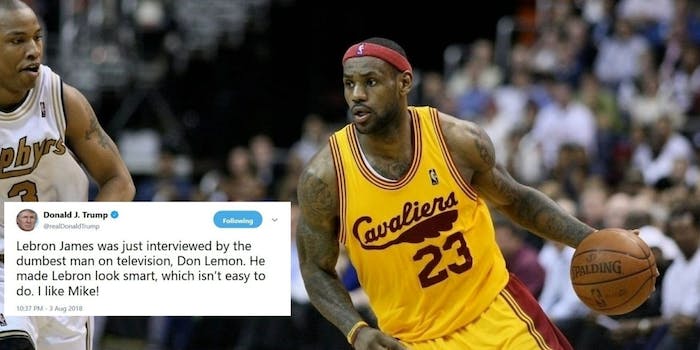 James won't 'shut up and dribble.'

LeBron James has made no efforts to conceal his dislike for President Donald Trump.

The most famous basketball player in the world—and also, the most talented—ripped Trump last season after he rescinded a White House invitation to the NBA champion Golden State Warriors. A few days later, James proclaimed he wouldn’t let Trump divide the nation through sports, saying “the people run this country, not one individual. And damn sure not him.”

On Friday night, as James was interviewed by CNN’s Don Lemon—another occasional target of Trump’s—the president felt compelled to tweet something nasty. Trump wrote, “Lebron James was just interviewed by the dumbest man on television, Don Lemon. He made Lebron look smart, which isn’t easy to do. I like Mike!”

Lebron James was just interviewed by the dumbest man on television, Don Lemon. He made Lebron look smart, which isn’t easy to do. I like Mike!

That last line presumably refers to Michael Jordan and the neverending debate about whether Jordan or James is the best player in NBA history. But nobody cared about Trump weighing in on that debate.

No, the internet focused on Trump using his Twitter powers to blast James—who, by the way, has received near-unanimous praise for recently opening a public school in Akron, Ohio that will help at-risk children with free tuition, free meals, and free bicycles and will give them a free scholarship to the University of Akron if the students graduate high school.

After Trump’s late-night tweet, the internet seethed at him.

As I said on @GMA today, @realDonaldTrump taking on @KingJames is like Ollie, the equipment manager from the movie Hoosiers, challenging Lebron to one-on-one. It isn’t going to turn out well for the President.

Of all the problems in the world, Trump used his presidential authority to call LeBron James stupid last night. LeBron just opened a school for at-risk kids, providing them free tuition, bicycles, food, counseling & guaranteed tuition to the University of Akron if they graduate.

We thought you said you didn’t watch @CNN ? https://t.co/A3k1Vm7zkQ

Underrated angle here. Trump is going to be in Ohio today to campaign for a GOP congressional candidate who is in trouble. Trashing Ohio's biggest sports hero in living memory is a AMAZING way to do that. https://t.co/kHl7WGyVe1

Imagine being President of the United States and feeling compelled to tweet, at midnight, that LeBron James — who is a genius — is dumb https://t.co/261gEFbTFi

You are the real MVP FLOTUS!

Donald Trump once showed up uninvited to a charity for kids with AIDS, sat on the dais, gave no $.

He started a fake university that scammed working people into giving their savings to him.

He’s sitting alone watching TV trashing a guy who did this. Go to hell. pic.twitter.com/Uo5AVtf6kl

And though there was no racist language in Trump’s tweet, Twitter certainly picked up on that vibe. Remember, James’ Los Angeles home was vandalized by a racial slur last year, and in the aftermath, he said, “Racism will always be a part of the world, a part of America. It’s alive every single day… No matter how famous you are, no matter how many people admire you, being black in America is tough and we have a long way to go.”

Okay reporters who’ve been holding out on calling the President a bigot—you’re now freed up. https://t.co/s6fSmbOtme

In February, Fox News host Laura Ingraham told James to “shut up and dribble,” a suggestion that motivated James to post this on Instagram.

Chances are James is not going to shut up—or stop making a positive impact on his community—any time soon.

Update 1:49pm CT: In the feud between her husband and James, first lady Melania Trump has picked her side. And she’s backing James.

“It looks like LeBron James is working to do good things on behalf of our next generation and just as she always has, the First Lady encourages everyone to have an open dialogue about issues facing children today”

“Her platform centers around visiting organizations, hospitals and schools, and she would be open to visiting the I Promise School in Akron”