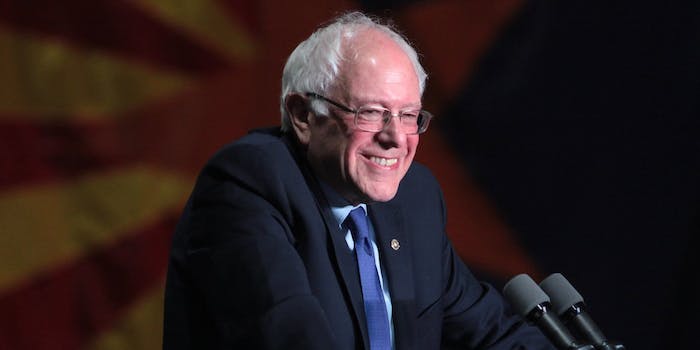 'Looking back at it now makes me ill.'

A day after he was hired by the Bernie Sanders campaign, a video creator with more than 30,000 YouTube subscribers lost the gig over a controversial video about Martin Luther King Jr.

Matt Orfalea created a video in 2009 titled “Media Manipulation 101” that featured a sexualized version of King’s “I Have a Dream” speech. After the video was discovered this week, Orfalea resigned from his new job with Sanders.

“All initial job offers are contingent on the completion of a final review of a person’s record,” Sanders’ campaign manager Faiz Shakir said, via Fox News. “That vetting process had not yet been completed. It’s clear some of Matt’s prior social media content does not reflect the campaign’s values. We accept his resignation.”

The Sanders campaign noticed Orfalea when he posted a YouTube video earlier this month claiming to show how the mainstream media was biased against the 78-year-old presidential candidate from Vermont. That video has nearly 450,000 views.

But a more controversial video from a decade ago led to Orfalea’s quick exit from his job with the campaign. In that video, Orfalea manipulated King’s “I Have a Dream” speech to include the words, “I still have a dream. It is sexual.” After the crowd applauds, King appears to make lewd comments.

In the video’s description, Orfalea wrote, “Martin Luther King Jr. was a great man. The real, ‘I Have a Dream’ speech is amazing. And society is undeniably better thanks to MLK and the civil rights movement. No one should be ever be judged based on their race/ethnicity. The purpose of this video is to show people that media on the web and TV can be edited to really twist facts/reality.”

In a Medium post published Monday and titled “My First Day in Politics,” Orfalea wrote he made that video when he was 20 years old and that it was “a pathetic attempt at comedy.”

“There was a time when the vulgar ridiculousness of the final product made me laugh,” he wrote. “Looking back at it now makes me ill. I choose not to delete it only because I want to be fully transparent. I’m sincerely sorry I ever made it.

“In addition to being greatly embarrassed, I’m sad,” he continued. “I’m sad that all those, who share details from my immature youth completely out of context, will never share the many other MLK videos I’ve made that are actually worth sharing.”

Orfalea also apologized for previously using the words “gay” and “retarded” in other videos.

“I’m ashamed of my past contribution to the endless supply of dumb YouTube videos,” Orfalea wrote. “Eventually though, I realized the last thing the world needs is another dumb youtube video. So I began to focus on making videos that served a real purpose. Videos I felt somebody needed to make. Videos I feel good about making.”