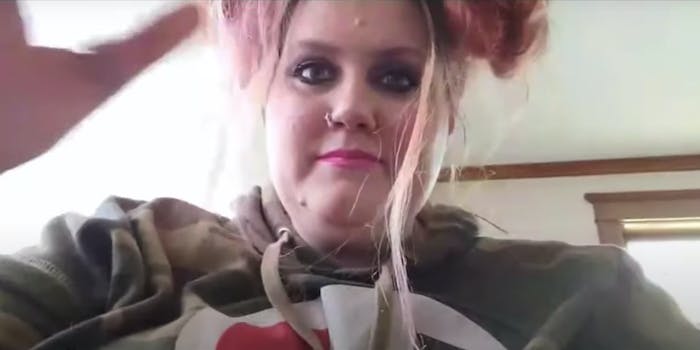 YouTuber films her partner threatening to ‘beat’ her son

A microinfluencer on YouTube, “Shanny for Christ,” reportedly filmed her partner threatening to beat her son. During Business Insider’s reporting about YouTube’s alleged wishy-washy response to the video in question, the YouTuber’s channel was terminated.

On June 1, Shanny—real name Shannon Dornbush—reportedly streamed as she and her child were in the car being driven by her partner “Rev”—real name Jason Egroff.

Business Insider reviewed Boulder Police Department records and discovered that the child is between 12 and 13 years old. Dornbush reportedly told the child to put the family’s cat on his lap, and Egroff told him that he will “get his ass beat” if the cat wasn’t fully on his lap.

In the stream, the way Egroff was driving also reportedly prompted Dornbush to yell at him.

“Stop looking at me and pay attention to the road. Put your hand on the f*cking wheel,” Dornbush reportedly said in the video. “You’re a piece—oh my God. You’re going to kill your f*cking family.”

While much of Dornbush’s content reportedly showed her, her children, and her partner living in poor conditions, the June 1 video caught the attention of people throughout the YouTube community. Dornbush, according to the Business Insider report, profited off of these videos through ads and through donations from concerned viewers.

YouTube, at first, reportedly said the video didn’t violate any of its guidelines. Then, after Business Insider reached out to it, YouTube reportedly removed the video and claimed it did violate the platform’s child safety policy, backtracking on its initial stance.

Dornbush reportedly successfully appealed the video being removed from her channel, seemingly getting it reinstated as it was available on her channel once again on June 3. After Business Insider reached out to YouTube for a second time, the platform once again reportedly removed the video.

Dornbush’s channel has since been terminated.

Both of YouTube’s decisions—to keep the video up and later remove it—were also made public via the @TeamYouTube Twitter account. People online have reportedly been reaching out to the Twitter account to complain about Dornbush’s content. In a May 15 video reviewed by Business Insider, Egroff reportedly threatened to kill himself, Dornbush, and her two children.

“Are you guys going to do anything about this? These people are using your platform to exploit and abuse their children. This should not be allowed on your platform,” one Twitter user asked the @TeamYouTube Twitter account, pointing to the June 1 stream.

Following a May 2019 incident, in which Dornbush was reportedly arrested and charged with domestic violence and third-degree assault, an officer said in a supplemental report that “I trust that the Sheriff’s Office, the Boulder Police, the District Attorney’s Office, and Child Protective Services will make use of this information in the best interest of the parties involved, with careful attention on the minor children.”

Dornbush reportedly had roughly 3,000 subscribers around the time her account was terminated.

The Daily Dot has reached out to YouTube, Shannon Dornbush, and the Boulder Police Department.