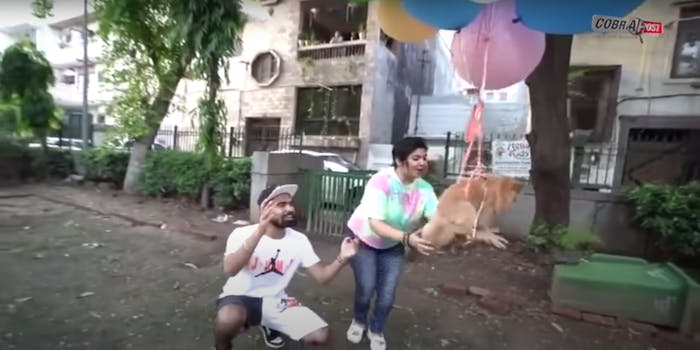 ‘He can love his dog but can’t abuse it’: YouTuber arrested after tying small dog to balloons

He was charged with animal cruelty.

A 32-year-old Delhi-based YouTuber, Gaurav Sharma, was arrested on charges of animal cruelty after he posted a video on May 21 of him and his mom tying his small dog to balloons and letting the dog fly in the air.

Sharma, known as Gauravzone on YouTube, has more than 4.15 million subscribers. The video shows the dog tied to more than 10 balloons around its waist. The dog appears confused and distressed when Sharma lets go of the dog, allowing it to suspend in the air for more than five seconds.

The video was taken down after he received criticism from viewers, and Sharma uploaded an apology video saying he took proper safety measures. People for Animals, an animal protection organization, saw the video and filed a complaint against Sharma to the Malviya Nagar police station that led to his arrest.

Sharma and his mom have been charged with animal cruelty under sections of the 2005 Disaster Management Act and the 1960 Prevention of Cruelty to Animals Act. The law states that animal cruelty includes subjecting an animal to unnecessary pain or suffering.

According to Newsweek, Sharma said in his apology video that he loves his pet like his own child. “I got influenced by seeing some video from outside,” Sharma said. “I apologize for that and I will appeal to all of those watching to not get influenced by my video.”

People online criticized his actions, saying there should be stricter protections against animal cruelty.

“Just shows the mentality of a man and what he is capable of doing for entertainment if given too much power,” one user commented on Twitter.

Another spoke out against those saying since it was his dog, he could do anything.

“Yes he can love his dog but can’t abuse it!” the user commented.

Sharma was released Thursday on bail. He did not immediately respond to the Daily Dot’s request for comment.