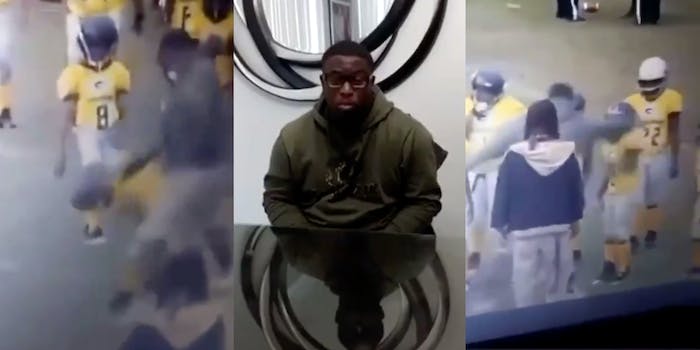 'No room in the game for coaches like this.'

A disturbing viral video shows a youth football coach punching a 9-year-old player multiple times while on the field.

The video, which has been shared across social media, sparked instant outrage among viewers. The child is a member of the Savannah Gators, who were playing at the American Youth Football National Championships in Kissimmee, Florida.

A 41-second clip shows the moment the coach strikes player number 2 hard enough to nearly knock him off his feet.

The coach mouths a few unintelligible words toward the crowd before he turns back to strike the player a second time. The second strike knocks the child to the ground. When he rises, the coach appears to shout at him before shaking his helmet. The video ends as the boy flees the field.

Outraged viewers immediately called for the coach to be fired. Parents of young athletes, in particular, were horrified to see how the coach treated the boy. The Savannah Gators responded to the backlash with a since-deleted Facebook post, issuing a halfhearted apology that didn’t sit well with many people.

Screenshots of the statement show a rambling response riddled with grammatical errors, a detail that was not lost on those following the story.

“What we all saw yesterday was disturbing to us all but let’s not blame everyone for one mans actions,” the statement reads. “The guy in the video is our 9U head coach he is a good guy that just took it a little to (sic) far on a 9U player.” The statement ends with a limp apology for the coach’s actions: “Apologize [sic] to the #BigPeachConference and the #AYF on the behalf of the #SavannahGators Organization we will get to the bottom of what happened at Nationals thanks have a bless day everyone !!!!!!!!”

A Facebook Live video posted to the page of an Alexis Cobb provides a nearly 40-second half-apology from the coach that was similarly poorly received. He explains in the video that “everyone has something to say” about his actions, but “at the end of the day, I am a man.”

“I’m not gonna make no excuses for it, I was wrong,” he says. “I shouldn’t have disciplined him in public, I should’ve waited till we got back. At the end of the day, I apologize to him, the kids, the city.”

“He forgave me, and his parents have forgiven me. So nobody else should be bashing,” the coach concludes.

Many people were horrified by the coach’s response.

“‘I shouldn’t have disciplined him in public, I should have waited until we got back’ IMAGINE what the fuck he does in private,” one viewer commented.

“He apologized for doing it in public. He said he should’ve wait until after. So, is he saying he should’ve hit the kid after the game in private??? He would’ve been better off not making this apology video,” one Twitter user wrote.

A fellow coach later confirmed to the International Business Times that the man has been banned from coaching American Youth Football for life. He is also currently facing charges in Florida.

The Daily Dot attempted to reach out to the Savannah Gators, but the team’s Facebook page and website appear to be temporarily shut down.