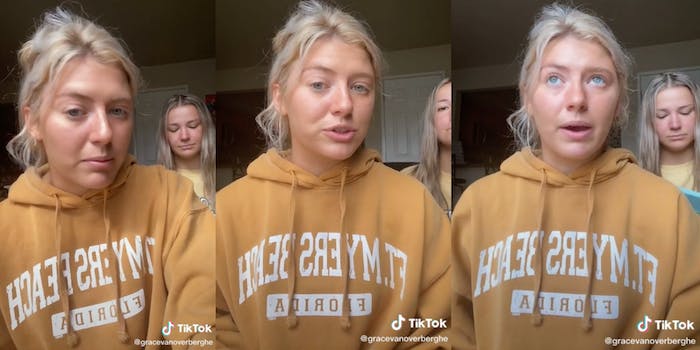 TikToker accuses bar of drugging her, 13 friends—and gets slut-shamed by some viewers

She says they all tested positive for opiates the next day.

A woman is facing sexist backlash online after she posted a video accusing a Michigan bar of drugging more than a dozen girls with opioids.

Grace Van Overberghe on Thursday posted the video to her TikTok account, where she issued a PSA to students in Kalamazoo, Michigan.

In the video, she claims that she, along with at least 13 of her female friends, went to the Y-Bar and Bistro in Kalamazoo last Monday.

The next morning, she says they all woke up with no recollection of the night before and soon realized they were allegedly drugged. She says they all tested positive for opiates.

Overberghe also says that throughout the evening, there was only one person serving them and that those familiar to the area would “know who (she’s) talking about.”

She alleges the person in question followed them to Florida on spring break and made sexual remarks to them in the past. Overberghe did not respond to the Daily Dot’s request for further information when contacted via Instagram on Tuesday.

A screenshot of a Yelp review for the bar shows an alleged former employee accusing two employees of being racist and of making anti-Black remarks in the past. It wasn’t immediately clear in what capacity the employees worked at the restaurant.

“White John…constantly gropes underage women esp of your 18 and attractive!” read a part of the long review. “He also tries to get good with the frats so he can quote ‘get some 18yr old pussy.’ He allows underage drinking so he can make money and is extremely racist.”

Overberghe’s video has been viewed 1.3 million times since being posted on Wednesday. Since it went viral, others have come forward with their own allegations against the bar.

She posted a TikTok video showing an audio message her friend got about the incident, in which a man named Hammock Dustin called her a “salty whore.”

“You’ve probably gotten drugged and raped before, you just don’t wanna admit it,” says the person in an audio recording. Their bio on TikTok has no followers, content, or engagements.

In another video, Overberghe shared a screenshot of a woman’s comment asking Overberghe to delete a previous video.

“This really undermines your other videos, activism and cause. From a woman in her mid 30’s, please heed my advice & delete,” read the comment, which was posted in response to a video in which Overberghe and her friend are seen laughing with the text: “I only went home with him because he gave me a taco.”

“As women, we are allowed to consensually do things. But to be un-consensually drugged or assaulted in any manner, we’re allowed to be pissed. That doesn’t mean we don’t get to do anything else just because we were assaulted,” Overberghe says, pushing back against the comment.

“I’m not heeding your advice in any way shape or form because it is not advice, you are judging us,” she says.

She also dismisses the claims that she lied “for internet clout” and that what she had was “definitely not opiates.”

“If you really, really need them, I can totally get you a picture of those drug tests, but first and foremost, you should really stop victim-shaming me,” she says.

On Tuesday, the bar’s Yelp page was being monitored by moderators, an “Unusual Activity Alert” notice on the page announced. Yelp typically issues these notices whenever an establishment is getting review-bombed following allegations of any kind against it.

While many reviews were posted by people in support of Overberghe, there were some reviews from people with alleged first-hand experiences.

“Be careful. John and John both have their issues. Asian John is an ass who screams at his bartenders saying they are pieces of shit and still expect them to smile like nothing happened,” wrote one person who claimed to be a former employee. “White John is an alcoholic who ‘check IDs’ of girls who look like they can’t be older than 18/19.”

“This isn’t a safe bar, it never has been,” the person added.

Some reviews show that the staff at the bar faced accusations of predatory behavior and racism before Overberghe’s video.

“He preys on young women, buying them drinks, wrapping his arm around them to pull them into his body, etc.,” reads one review from October. “Also making an extremely racist comment to a large group of people about people of color.”

A petition was created to raise awareness about the alleged predatory nature of the bar staff, and it has since garnered more than 9,000 signatures.

The Daily Dot has reached out to Kalamazoo Sheriff’s Department Office and Y-Bar and Bistro and will update the report if they respond.