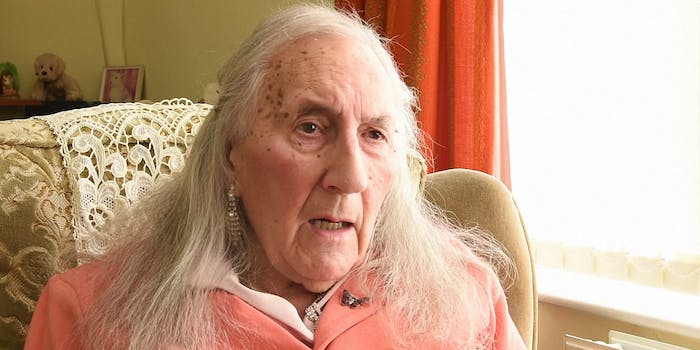 She knew at a very young age she was a woman, but never felt safe to be herself.

There’s no age limit to begin living as your true self. At 90, English World War II veteran Patricia Davies has just officially come out as transgender.

Even though she knew from a very young age that she was a woman, Davies never came out because the Royal Army Service Corps would have classified her as “homosexual.” For years, she remained closeted.

Davies didn’t come out to her wife until 1987, after nearly 50 years of marriage. She ended up being very supportive, purchasing jewelry and dresses for Davies, who would wear them in private. Her wife passed away in 2011.

In the 1970s, Davies saw a transgender character on a TV show and realized she could transition. She originally considered coming out after telling her wife in the late ’80s, but teens in the neighborhood would throw eggs at her window when she’d wear high heels. It wasn’t until she saw a MTF character in the 2014 movie Boy Meets Girl that she began to publicly transition. Since then, Davies has started hormone replacement therapy, which has given her “a new lease on life.”

“It’s not 100 percent safe now but it’s much better than it was. People that I have told seem to be very accommodating and haven’t thrown abuse at me,” Davies said, according to the New York Post. “I have slowly started to tell some of my neighbors. Everybody said, ‘Don’t worry, as long as you’re happy.'”

There’s a long legacy of transgender veterans serving in the military. Christine Jorgensen was a trans woman who served in the U.S. Army during World War II who later underwent sex reassignment surgery in the early 1950s, making her one of the first nationally recognized American transgender women. In the process, she opened up a larger conversation about gender transitioning that led the way to trans activism in the 20th and 21st century.