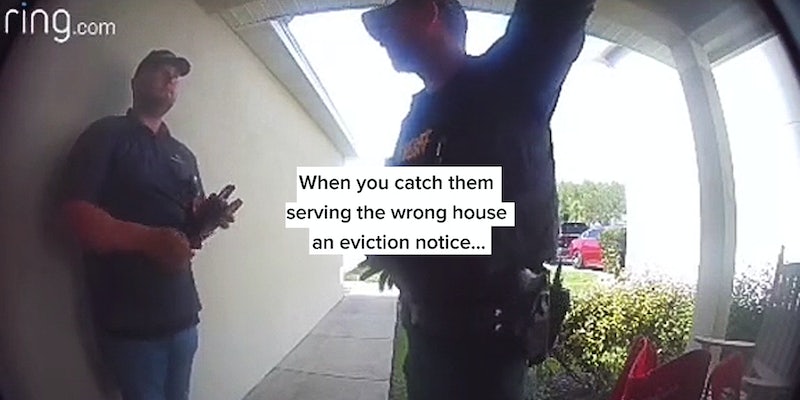 ‘They had already ripped out my lock’: Woman says cops served an eviction notice at her house. They had the wrong address.

'3 people couldn’t read the numbers on the house!?!'

A woman on TikTok caught three police officers attempting to serve an eviction notice at her house, but they allegedly had the wrong address.

Jennifer Michele (@jennifermichele82) shared Ring security camera footage of the cops at her house. She was out to lunch at the time but able to call them out using the doorbell camera’s feature.

In the video, Jennifer asks the cops what they are doing, and they tell her they’re there to finalize the eviction.

“It was posted a week ago,” one of the officers responds.

Jennifer tells them she’s caught up on all her bills, and that her dogs are inside the house. At that point, one of the cops walks away from the porch to check the house number. Another one asks Jennifer her name.

“My name is Jennifer, and that is my house,” the woman responds.

“I am caught up on my bills. Nobody has served me an eviction notice,” Jennifer says. “What the hell is going on?”

The cops walk back to Jennifer’s front door, and one of them addresses the Ring camera.

“We actually, we do apologize,” the cop says. “We have the wrong house. It was the next-door neighbor’s.”

They tell her the lock to her front door will need to be repaired and assure her they won’t enter her house.

Viewers were appalled by the cops’ mistake. Some pointed out that if Jennifer didn’t have a Ring camera, she wouldn’t have even known they were trying to break into her house.

“Why are they always going to the wrong house,” one viewer commented.

“Just imagine if you didn’t have a ring doorbell!” a second viewer said.

“Imagine if you didn’t have The RING and came home to an empty house,” another wrote. “Girrrlll I’m happy you caught them in time!!”

Some viewers called out the cops for breaking Jennifer’s door without verifying that they were at the right house.

“Wait so they just started drilling in her door without even checking if that was the right house first,” one user asked.

“They broke the lock before they knew for sure whoa,” another user said.

One user added, “how do they not verify the house number before doing any of this stuff. like how hard is it to check the numbers on a house.”

In a follow-up video, Jennifer shares more context in a TikTok “storytime.”

“All I kept thinking was, what if I didn’t have a Ring [camera], what if I hadn’t checked my Ring? What if I was out of town?” she asks.

“Let’s say I was out to lunch with my mom…my dogs were inside,” she says. “What if they had cleared out all my stuff? They more than likely would’ve taken them to animal control!”

Jennifer says pressing charges did not cross her mind and that the cops bought her, her mom, and her daughter lunch as a nice gesture.