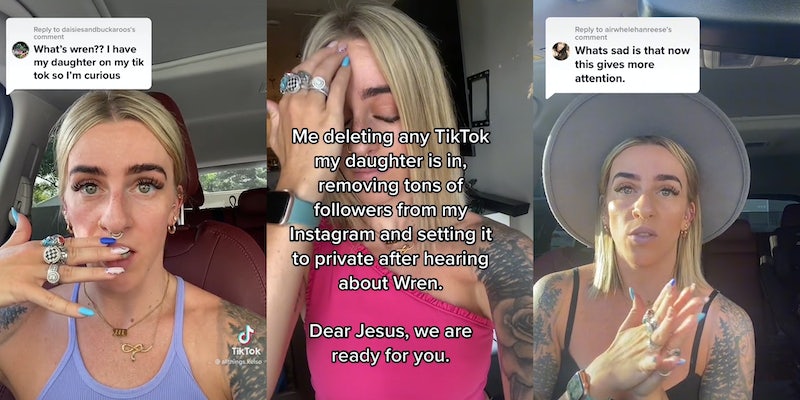 In a viral video, a mother claims she is deleting any TikTok that features her young daughter and deleting “tons” of followers after becoming aware of the Wren Eleanor situation, but she’s not the first. TikToker Kelso (@allthings.kelso) captioned her video #SavetheChildren, which has been viewed over 674,000 times.

But who is Wren? And why does the hashtag #SaveWren have over 16 million views on the platform?

Blonde-haired, blue-eyed, and the epitome of cuteness, Wren Eleanor was TikTok’s favorite three-year-old, with the hashtag #wreneleanor having gained over 351.2 million views. But recently, the same platform that brought her—and her mother—to fame with 17.3 million followers have turned against her.

TikTok moms have been rallying against Wren’s mother, Jacquelyn, since early this year, accusing the mother of exploiting her young child on the platform. Scrolling through the mother-daughter duo’s account, you’ll see videos of Wren with millions of views. Most of them show the toddler in different outfits, dancing, and generally doing kid stuff. But concerned mothers are convinced the account is not as innocent as it seems.

“What caught my attention was there was a video of her little girl that had a tampon and she was posed in a kind of an inappropriate way and she was like playing with a tampon,” Kelso explains.

She says that her issue with the video was that it has almost 400,000 saves and thousands of “creeps” in the comments. (The TikTok in question has since been deleted.)  Kelso is not the first TikTok mom to bring up the fact that most of the “questionable” videos—such as Wren taking a bath in a bathing suit—have more saves than other videos.

TikTok duets with thousands of views show the astronomical number of saves on Wren’s videos where she has a more revealing outfit on or is posing in a more adult way. For instance, Wren’s bathtub video has over 58,000 saves whereas “normal” videos have an average range of 5,000 to 10,000 saves.

Other videos expose the hundreds of people sexualizing Wren in her comments section, commenting lewd and inappropriate vulgarities. Though moms on TikTok acknowledge the online predators are the issue, they believe the mother has a big part to play in Wren’s targeting.

“Obviously there are creeps everywhere and they’re a lot of things you cannot control when it comes to protecting children,” Kelso says in a follow-up video. “But you can control the content you post of your own children on social media.”

TikToker Danielle (@douladanielletilley) who recently received over 10 million views on a video on the topic, urges parents to reconsider posting photos of their children online. She says she found a man on Pinterest who commented on a photo of Wren and whose entire Pinterest are pins of children’s feet.

“It’s the creeps’ fault and I agree, but the fact of the matter is they are out there and they are not leaving any time soon,” Danielle says tearfully in the video. “And it is your job as a parent to protect your child.”

Many mothers say Jacquelyn is well aware of the discourse and is simply catering her child’s content to adult male viewers. From choosing revealing poses of Wren as thumbnails on her videos to dressing her in “scandalous” outfits. There’s a now-deleted video floating around TikTok where Jacquelyn directly addresses the allegations. In it, she jokes about how people are accusing her of “exploiting her child.”

@haleyfrancesca_ Reply to @seduction.secrets Oh, she’s well aware .. these are all recent. There are comments everywhere. She made a reply video. She just doesn’t care. #protectourchildren #wreneleanor <" href="https://www.tiktok.com/music/sonido-original-6996859496500841222" rel="noopener">♬ sonido original – ><

The campaign against Jacquelyn has gained so much momentum that there was a subreddit created in April to address the issue. According to the subreddit r/WrenEleanor, the space is not a fan page, but a “place to discuss the child exploitation of Wren Eleanor from TikTok.” The subreddit has gained over 13,000 members.

While there is no evidence at this time of child exploitation by Wren’s mother, TikTok moms still believe the child is in danger and are on a mission to de-platform Jacquelyn. Their focus is to bring as much awareness to the account since that’s all they can really do.

“What bothers me the most about this specific type of child exploitation where a parent basically uses their kid as a farm for content is that the law hasn’t adapted yet to the current realities of social media,” TikToker Alexia (@hotweirdg0rl) says in a video. “These kids are completely unprotected by child labor laws.”

“It’s one thing to put your kids in content, I actually think that’s fine provided that you’re not exploiting their privacy and keeping it respectful,” Alexia continues. “But people like [Jacquelyn] don’t.”

The Daily Dot has reached out to Jacquelyn Eleanor and Danielle Tilley for comment via Instagram Direct Message, and to Kelso and Alexia via TikTok comment.