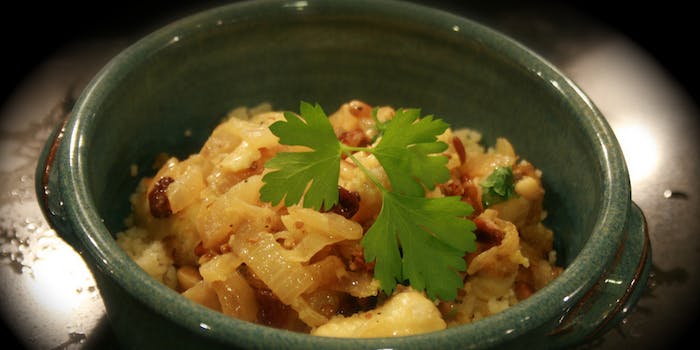 How to cook for the perfect World Cup party

Olympia, Wash.-based bloggers Angie and Chris Caldwell are slow-rolling a delicious, nerdily mapped-out tournament of their own.

I told you this nasty hangover was inevitable at the beginning.

The hidden bummer about the World Cup is that for all its show-stopping breakthroughs of instant classic play, in three weeks we’ll be looking at a small cluster of contenders still standing—Germany, Argentina, Spain—and then Brazil will win the World Cup.

Costa Rica excited us; Colombia thrilled; the bipolar Ivory Coast Elephants teased; Luis Suárez was downright kinky; Graham Zusi is back in Major League Soccer purgatory, and the check’s here. The United States soul train run in the Brazil was the stuff of legend, but now it’s over and Sportscenter is leading with NBA free agency.

But don’t ignore that global citizen twitch just yet.

For those of us who enjoy more wide-open tournaments, Olympia, Wash.-based bloggers Angie and Chris Caldwell are slow-rolling a delicious, nerdily mapped-out World Cup of Food. Indeed, there are few of these timely, SEO-tinged projects floating around, but theirs wins on its grand methodology: one that shows love for both culinary projects and seeded tournaments.

Sixty-seven countries qualify here, with 13 familiar foodie staples (Greece, Mexico, China, Italy, etc.) granted automatic berth into the final, 32-nation bracket. The other 54 are jostling in a series of play-in games to make the 32. (They were drawn into geographic clusters, so that regional overlap can be avoided until the sweet 16.) The Caldwells take suggestions for dishes, do their research, prepare a plate, and declare a victor.

Though the soccer concludes Sunday, we’re just entering the final phase of qualifying bake downs for the 32-strong bracket. This final qualifying round features plates from the warring nations of Madagascar and Morocco, the Philippines and Turkey, Peru and Brazil, and Poland and Germany. (Here’s the rest of the bracket.)

The posts win on their comprehensive affection. Take the recent breakdown on Morocco. It sidesteps standardized dishes like couscous, includes population facts, nods to North African dynasties, and finds a worthy competing candidate.

…we noticed that every single Moroccan cookbook had a recipe for a particular dish, a tagine (a Moroccan stew named after the clay pot in which it is traditionally prepared) of chicken with olives and preserved lemons (recipe follows).

That sounds more heartily interesting than the soccer World Cup’s blue-blood-laden final four of Brazil, Germany, Argentina, and The Netherlands. But if you’re feeling timely, World Cup fever can be manifested in food form fairly easily. Argentina likes grilled steak, Germany likes sausage, and Brazil and the Netherlands have signature sandwiches—the Bauru and Dutch Double Dip, respectively—that are easy to make at home.

What I’m saying is, root for Argentina to make Sunday’s final. It’s an excuse to have a cookout and shake the dead leaves out of your Weber.

But the more intricate World Cup of Food is a slow-cooked affair, and will run by way of deep cut blog posts through the spring. Dig in.